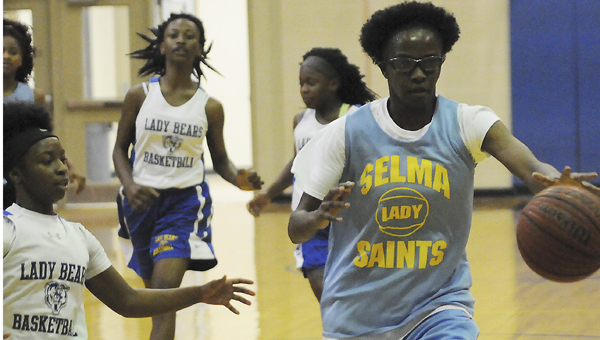 The games consisted of two 15-minute halves with a running clock.

Keith is coming off a class 1A state championship in 2015 and a semifinal run in 2016, but the losses of senior guard Harriet Winchester senior forward Zykia Pettway were immediately noticed Friday.

Selma only lost one senior — Charmekia Moore — from last season’s roster, although Jacquetta Dailey did not play in the play date due to a sprained ankle.

The Saints still had plenty of experience on the court, and it was on display against Keith.

Jamya Smith opened the scoring for Selma with a 3-pointer to give her team a 3-0 lead. Kynadra Lewis passed to Ta’Sharri Grimes for a layup and then Lewis hit a jumper to put the Saints ahead 7-4.

Near the end of the first half, Selma started to break open the lead. Grimes drove to the net with three minutes remaining and made a layup to push the Saints’ lead to 15-4.

The second half started much like the first half, as Areyana Williams sank a layup to extend the Selma lead to 21-6. Fifteen seconds later, Williams ran down the court on a fastrbeak to make it 23-6.

With Keith down by 17 points, the Bears began to make a run. Alyshia Boone knocked down a layup with just under 10 minutes left to lower the deficit to 23-8.

Trailing 25-10, Keith made the next eight points of the game, including a long two-point pull-up jump shot from Ambreya Snow to make it 25-14.

While Selma didn’t score late in the game, head coach Anthony Harris was impressed with his team’s decision to pass the ball around to keep it away from Keith instead of driving toward the hoop and risking a turnover.

Harris said it was the first time in five games he didn’t need to get up from his seat during the game.

While Selma made it through its games Friday with relative ease, Harris said the Saints still gained a lot from the play date.

“It gives us an understanding of what we need to do for the rest of the summer going into the fall,” Harris said.

For Williams, it was his first look at what his team plays like after the graduation of Winchester and Pettway. Although Keith went 0-3 Friday, Williams is optimistic his team can only get better from here.

“We’ve got a lot of improving to do,” Williams said. “I’ve got a few returners, so by the time the season starts, I think we should get more experience.”