Employee makes sure residents sign up for garbage service 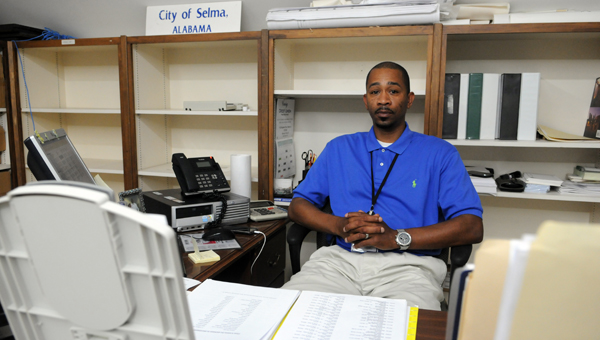 Steven Hendrieth has been with the city of Selma for about two months making sure people sign up for garbage service and working with Sea Coast on customer service issues. Hendrieth estimates about 500 residents have not signed up for service with Sea Coast.

For the past two months, Steven Hendrieth has been serving as waste accounts coordinator for the city of Selma.

It is a new position created to make sure residents abide by an ordinance established in 2002, requiring every household to have garbage service.

“Most of Selma is compliant,” Hendrieth said. “(However), we do have residents that don’t have garbage services.”

Although the number is constantly changing, Hendrieth estimates roughly 500 homes currently do not have garbage services.

People found in violation of the ordinance will be given a one or two week warning depending on individual situations, Hendrieth said.

If residents fail to sign up for service, code enforcement will issue a citation to appear in court.

Hendrieth said at that point residents still have one final chance to sign up.

“If you just go ahead and sign up, pay your bill, it goes away,” Hendrieth said.

Residents have until their court day to get service and have the citation forgiven, but they must show proof of service to the magistrate.

But Hendrieth’s job duties don’t end there. On the other end, Hendrieth makes sure Sea Coast is fulfilling its responsibilities and help keeping its records accurate.

Hendrieth even spent an entire week doing a ride along with the truck drivers.

“I got to see it first hand. It was an eye opener,” Hendrieth said.

Hendrieth was able to observe how the garbage is picked up and listen to residents’ concerns as well as create a roster of homes without service.

Hendrieth said his current work keeps him busy but he has future plans for Selma, such as implementing a recycling program in the school system.

[The city] had one a while back, but it didn’t go right. I think people were putting stuff that wasn’t supposed to be in there so they cancelled the program,” Hendrieth said.

Although the program no longer exists, Hendrieth said he found the old recycling bins while at Public Works.

“I know we could do something with them,” Hendrieth said. “Maybe not start in the community yet, but just try to put one at each school [and] have the kids recycle.”

Hendrieth believes implementing recycling in schools and teaching children to think green will be a step in the right direction for a cleaner and healthier city.

“This stuff is just lying around the streets and never gets picked up and that’s what made me want to do recycling,” Hendrieth said.