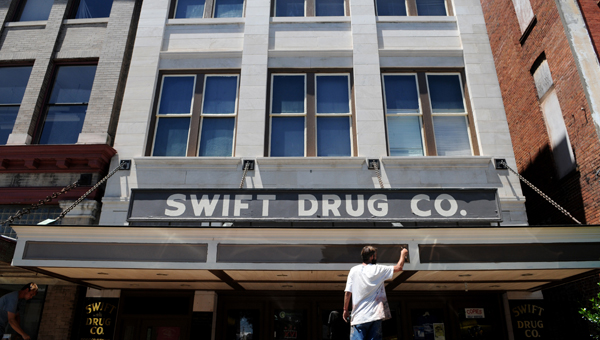 Steven Neeley paints the exterior of Swift Drug Co. on Broad Street. The drug store is getting prepared to celebrate 100 years of business in October.

Swift Drug Co. has a long history in Selma — 100 years to be exact.

The family owned drug store has begun sprucing up for its centennial celebration in October.

The existing building and business has been located on Broad Street since 1916, but its history extends beyond that.

Swift said his great uncle, George A. Swift, owned a drug store on the corner of Broad Street and Selma Avenue. Because George didn’t have a long-term lease, he ended up losing the space.

Where the existing building sits now was an empty lot owned by the Peters family who owned and operated Selma Marble and Granite at the time.

Buddy said George asked the Peters’ family to construct a building for him on that lot since for the drug store. The Peters family built it and leased it to the Swift family from 1916 until 1976 when the Swift family purchased the building.

Over the years the drug store has seen many changes. Originally, the structure only had two stories. In 1926, a third floor was added to accommodate room for more physicians.

At one point, the drug store had a soda fountain and its outer appearance was changed to fit the styles of the period.

“At one time, we did like everybody else did and put aluminum on the outside of it. Brightly colored and all,” Buddy said. “Then some years ago we took all that off and restored it to its original appearance.”

The one thing that has remained consistent over the past 100 years is ownership by the Swift family, even with the doubt of difficult times.

“There have been some real tough times along the way,” Buddy said. “During the Depression my grandfather lost a lot of money here for seven straight years and almost went bankrupt but luckily he didn’t.”

Buddy jokes that luck is why the business has lasted so long, but is thankful for long lasting customers.

“We know and love our customers,” Buddy said. “I think we’ve made a difference in people’s lives over the years. We’re proud of that.”

Buddy said the business plans on celebrating the anniversary in October but is still working out the details.

“We’re looking forward to it,” Buddy said. “You’ll be hearing more about it as we get closer to it.”