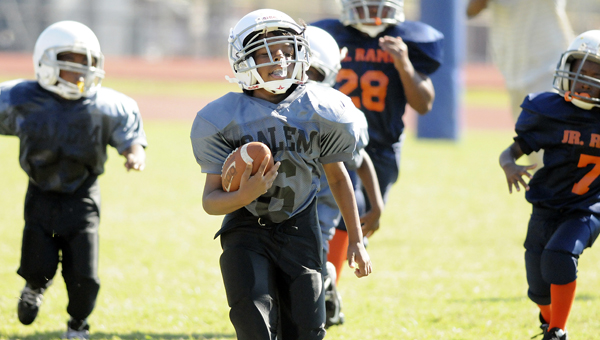 Youth football season is still months away, but the Selma Parks and Recreation Department will start holding registration on June 22.

Registration for the Selma Parks and Recreation Department football league is starting earlier than ever.

The recreation department announced registration will start June 22 at its office at Memorial Stadium, which is about two to three weeks earlier than usual.

“This is the earliest we’ve ever started,” said football director Terry Jackson.

Jackson said he decided to get going early this year for two reasons. First, many of his coaches are chomping at the bit to start preparing their teams. Plus, baseball season is now over for many local players. Jackson said getting football registration going will allow those who register early to start working out with their coaches.

Jackson said he allows coaches to keep the majority of their kids from year to year since they have invested so much time.

“I feel like they should keep them another year because they are the ones who worked with them so hard,” Jackson said.

Over the last two seasons, the league has grown. Two years there were 20 teams and last year there were 26. Last season, teams came from Uniontown, Marion and Orrville, and Jackson expects those same teams to be a part of the league this year.

Jackson expects the league to grow again this year.

“I’ve had some phone calls from some new parents, so I feel like I’ll get a few more,” Jackson said.

The cost will be $10 per player, even for those who took part in the league last year. An adult must sign a player’s registration form. The child must be present at the time of registration because they have to be weighed.