Work on Sand Bar under way 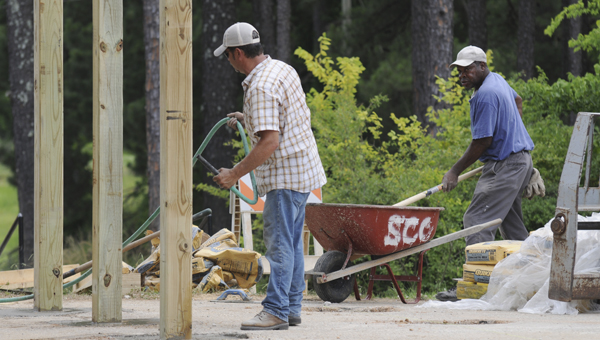 The Sand Bar restaurant is coming together after months of being closed.

In late December, the restaurant experienced severe flooding after a string of heavy storms. Now the goal for restaurant owner David Pearce is to be serving up good food and good times as early as July.

“It’s getting done as quick as we can do it,” Pearce said. “There haven’t been many hold ups, really.”

The new structure is about 1,600 square feet, according to project manager Jay Nielsen, and is elevated roughly 14 feet off the ground. It is now located on the paved parking deck up hill from the old structure.

“The ordinance of the city and by the building code is it has to be built over the 100-year mark,” Pearce said. “So if water gets into it this time, Noah will be coming back.”

In April, the city council approved a long-term lease with Pearce. Under the terms of the agreement, the restaurant will be under an initial lease with the option to renew twice for a total of 30 years.

The new restaurant will feature new equipment, draft beer and larger dining areas such as an outside deck that will seat up to 60 people. Underneath the deck, Pearce hopes to build a playground for children.

“It’s a totally different experience than the double wide there below us,” Pearce said. “It’s going to be a lot nicer than it was before.”

Pearce plans to have the old building removed within the next few weeks and potentially make that space additional parking because of where the new building is located.

Pearce is excited about the restaurant reopening and said others are also looking forward to it.

“I don’t think people knew how much they [would miss] it until it was gone,” he said. “I’ve gotten more responses when it was gone than when it was open.”

The whole ordeal has been a learning experience for Pearce. He said because the new structure is such a large investment, he will do as much as he can to better promote the restaurant once it’s open.

“I know a lot of people travel to Montgomery or travel to Marion, even for a small restaurant. I’m hoping I can get that same atmosphere,” Pearce said. “People aren’t going to come to Selma unless there are things to do. You’ve got to have restaurants and entertainment.”