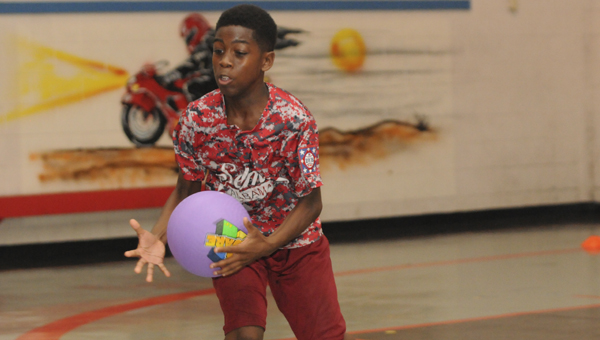 Tristine Marshall, 13, catches a ball during a game of dodgeball Monday at the Police Athletic Center. The Police Athletic League had its first day of its eight-week Summer Enrichment Program Monday. — Justin Fedich

The Selma Police Athletic League has spent the past 16 years giving children a chance to excel both athletically and academically while school is out of session.

The Summer Enrichment Program lasts two months throughout the summer at the Police Athletic League Center, located at 142 College Drive. In the morning, children 6-13 participate in a reading program. After lunch, they play dodgeball and basketball.

From 3–5 p.m., high school aged students from different schools around the area meet to play basketball. Many of the high school students take time to mentor the younger children through reading and athletics.

Det. Dorothy Cowan said through the program, children are encouraged to do something productive with their time.

“The purpose of this program is to give the kids something to do,” Cowan said. “Get them off the streets of course, and at the same time, enrich their mind where they’ll be doing something during the summer besides athletics.”

Kendarius Acoff, a 10-year-old who has been a part of the program for the past three years, said dodgeball and basketball are his favorite parts of the day, but he wouldn’t be reading nearly as much if it wasn’t for the Summer Enrichment Program.

Cowan said the bonds the kids form with each other allow them to make positive relationships toward accomplishing a goal. The high school basketball players who play in the afternoon also receive a positive experience from the Police Athletic League.

While the high school students come from various schools, they play with each other and form friendships that extend beyond the court throughout the basketball season. Cowan said it makes the basketball rivalries between the schools less hostile because the players have a mutual respect for each other.

“We have kids here from all the schools playing together here on one team, and we like that because instead of playing against each other, they’re playing together,” Cowan said.

Twelve-year-old Marselis Jones has been a part of the Police Athletic League for the past five years, and he said it’s given him more than just something to do during the summer. Jones said he’s learned to work with others toward accomplishing a common goal, and now he will try to break up a fight in school rather than join in on the negative behavior.

“It helps me to be a better person,” Jones said.

While the sports teaches children life lessons, the daily reading gives children like 13-year-old Tristine Marshall an opportunity to be a better all-around student when the school year rolls around.

“I get to read books, and when I get to school, I do well on my tests,” Marshall said.

Cowan said there are currently 25 children signed up right now, and she is hoping for around 40 total to join. To register a child for the summer program, stop by the Police Athletic League Center from 9 a.m. – 5 p.m. to pick up an application.