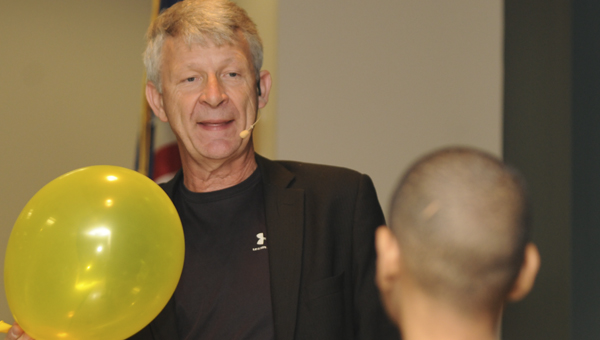 Magician Gary Ledbetter performs a magic trick with a balloon during a magic show at the Selma-Dallas County Public Library on Monday. — Justin Fedich

For one of Gary Ledbetter’s final magic acts of the morning, he invited 5-year-old Bella Roberts to the makeshift stage in the Selma-Dallas County Public Library. Ledbetter said he’d pull a rabbit out of the magician’s hat on Roberts’ head, but he instead pointed to the top of Roberts’ head as he pulled the magician’s hat off, calling it a “hare.”

The children in the crowd thought they had been duped, but as the show came to a close, an actual rabbit named Harry, appeared in Ledbetter’s hands and the children couldn’t contain their excitement.

The Selma-Dallas County Public Library kicked off its summer-long Sensational Selma Summer Monday, as Ledbetter, a Montgomery native who has been a magician for 35 years, wowed a room full of children with a wide range of tricks.

Although Ledbetter knows how his tricks are going to work before he performs them, he said he tells children who ask how he does his tricks something entirely different.

“I tell them I don’t know how they work,” Ledbetter said. “I just do them.”

“For me, my favorite part is the interaction I get with the kids,” Ledbetter said. “Especially, the ones that come up and help me, but also the ones that don’t.”

The magic show is just one of many events scheduled at the library for the summer. Just this week, there is a puppet show, petting zoo and juggling show for the children to enjoy. Nichols said she hopes the magic show, as well as the other shows planned, will get parents and children involved in the library by teaching them that learning and using their imagination is fun.

“The object is to get kids excited about the summer, so they’ll keep coming back, checking out books on magic and all kinds of other stuff,” Nichols said.

Roberts was the last child chosen to help Ledbetter perform his trick during the magic show. From an oversized hat to a broken magic wand, Ledbetter’s gimmicks kept both Roberts and the other children entertained.

“I was waving the wand, and it was breaking,” Roberts said.

While many of Ledbetter’s tricks were met by laughter or applause from the crowd, the biggest response from the children was when Ledbetter finally pulled a rabbit out of a hat to end the show.

Ledbetter said after the show he has to end with the rabbit, because the children won’t be able to focus on anything else once the rabbit is involved.

In order to keep it a surprise, Ledbetter makes sure the children don’t believe he actually has a real rabbit.

“Usually I tell them I’m allergic to rabbits if they ask me if I have a rabbit,” Ledbetter said.

Each child got to pet Harry the rabbit in his cage after the show. The rabbit was even a hit with the adults, including Nichols.