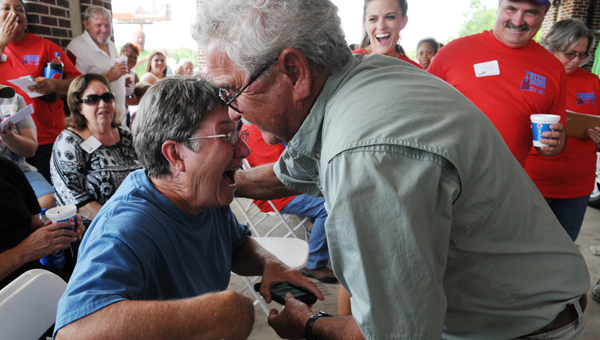 Thomaston resident Malcholm Sanders hugs his wife, Melanie, after being named winner of the 2016 Ford Fling at Moore-Steward Ford in Selma on Saturday. The couple drove off with a new 2016 Ford Escape that they plan to eventually give their 14-year old granddaughter.

Thomaston residents Malcholm and Melanie Sanders will be able to give their granddaughter the ultimate gift after winning the Ford Fling raffle at Moore-Stewart Ford dealership.

Saturday morning, the last 100 contestants of the annual raffle waited on the edge of their seats to find out who would drive off the lot with a 2016 Ford Escape or 2016 Ford Fusion.

“How often can you win a new car? A brand new car,” Malcholm said. “It’s indescribable.”

The couple picked the Ford Escape for their 14-year-old granddaughter, Alana, for when she becomes driving age.

Malcholm said he chose the Escape because Alana is a musician, and it would best accommodate her instruments.

Entering the contest, Malcholm had a gut feeling he would bring home the prize.

For the past 22 years, the dealership has given out more than a half a million dollars in free vehicles. This year, the winner had an option to choose between two an Escape or Fusion. Both vehicles were valued close to $25,000, making it the most expensive car they have ever given away.

The Ford Fling is the dealership’s largest promotion during the year as well as the most anticipated for many customers.

“It’s exciting just to see how everybody gets fired up,” said dealership general manager Barry Parker.

Of the final 20, two contestants were previous winners, nine were brand new to the contest and the remainders were raffle veterans.

“One lady had been in it for a total of 18 times and this was the closest she had gotten down to the top 20,” Parker said.

This was the first time Malcholm had participated in the annual promotion. He said each time a name was pulled, he would imagine his name was called and was relieved when it wasn’t.

Despite the stress and anxious waiting, Malcholm said he enjoyed every moment of the contest.

“It was a lot of fun. Everybody was friendly and [I] had a good time,” Malcholm said. “I’ll do it again. I wish it was next week.”