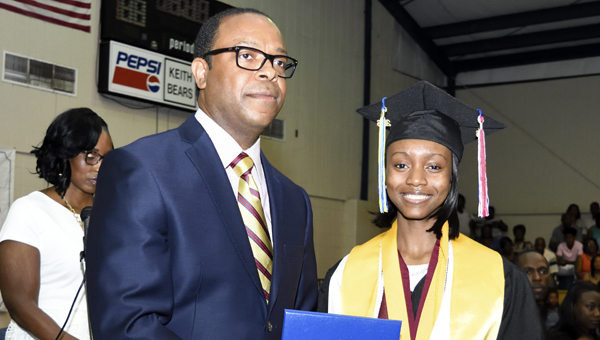 Epiphany Simmons was named Keith High School’s valedictorian the night before graduation. She is shown with principal Fredrick Hardy.

Epiphany Simmons, 17, didn’t know she was going to be named the 2016 valedictorian of Keith High School until the night before graduation.

“We were all on the edge of our seats,” Simmons said. “It was so nerve wrecking because it was so close.”

It was a close race for the title. The difference between her GPA and the salutatorian was a mere 0.034 points.

On May 26, Simmons, daughter of Vickie Simmons, graduated with 49 other Keith seniors. She was also one of seven students to have earned an associate’s degree of science from Wallace Community College Selma through the Howard Hughes Medical Institute grant.

After years of hard work, it all paid off in the end.

“[Graduation] was very emotional,” Simmons said. “But it was also a very proud moment because everything that I worked so hard for finally came true. I was just so elated to know I graduated at the top of my class.”

For Simmons, her future is planned out. Having gotten a head start with her college education in high school, she is doing everything she can to stay ahead.

Right now Simmons is participating in the Rural Minority Health Scholars Program at the University of Alabama. It’s a five-week program allowing students to take a course to be used toward their degree.

After completing the program, Simmons will attend the University of Alabama at Birmingham to study biology, pre-medicine. Her dream is to become a cardiothoracic surgeon.

After graduating college, she wants to return to her hometown of Orrville.

“My primary goal is to go to medical school, become a doctor but ultimately give back to my community,” Simmons said. “My hope is to come back after I finish medical school and start my own practice to give back to those who can’t help themselves.”