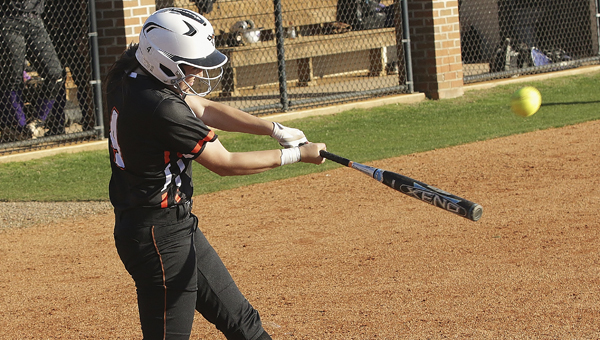 It was fitting that the word “grit” became the rallying cry for the Auburn at Montgomery University softball team this season.

In its pursuit of a third straight NAIA national championship, the team nearly rallied from a 4-0 deficit Wednesday against eventual national champion Oklahoma City. Instead, a three-run inning left them just short and ended the Warhawks’ season.

“Honestly, regardless of how the outcome came, this was the most fun season I’ve ever had,” said outfielder Amy Persinger, who graduated from Dallas County High School in 2014.

“I feel like we were more successful as a team this year, breaking records and whatnot.”

The team took its motto on grit so seriously that it stopped for a photo in front of a billboard in South Dakota that pictured John Wayne.

Next to Wayne’s picture was a quote from the actor that said “Don’t much like quitters, son.”

The picture was posted onto the college’s social media accounts and became one of the defining descriptions of a team that accomplished so much.

AUM broke the college’s all-time season wins record and finishing with a 53-8 record.

“To be a part of something like that, it’s unforgettable,” Persinger said.

Persinger also had a tremendous year in her own right. After spending much of her freshman season as a reserve on a veteran team, she became a star for the Warhawks this year. She tied for the team lead with 10 home runs and also led the team in total bases and in batting average.

“The home runs were just a bonus for me,” Persinger said. “I was just trying to get on base and that’s what came out.”

Persinger was given three honors in April. She was named first-team all-conference by the Southern States Athletic Conference and was selected to the SSAC’s All-Academic team.

Persinger was also named the Warhawks’ Champions of Character representative.

In Wednesday’s game, Oklahoma City had kept the AUM bats quiet until there were two outs in the bottom of the seventh inning. At that point, AUM made one final push.

The Warhawks brought in three runs and had the tying run at first before Oklahoma City got out of the inning.

“We’ve been doing that all year long where we would come back,” Persinger said. “Just to see that happen, we didn’t give up at all. We continued to have that fight in us.”

AUM had won the last two titles, although Persinger was only on one of those teams.