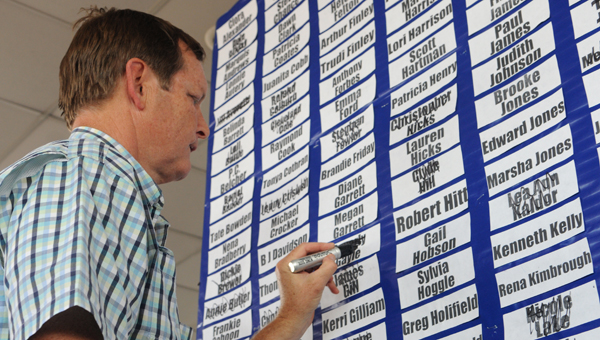 odd Stewart, owner of Moore-Stewart Ford, crosses out a contestant’s name during the 22nd annual Ford Fling. Each year the dealership holds an annual car raffle.

The last man or woman standing will win a new vehicle today.

On Friday, 150 of the original 200 contestants packed under Moore-Stewart Ford’s front awning on bleachers and lawn chairs for day two of its Ford Fling reverse raffle.

“If you get eliminated, you have the pleasure of eliminating somebody else,” said general manger Barry Parker.

For 10 weeks, the dealership had been collecting registration forms and qualifying contests.

When the time came Thursday, 200 people were selected for the chance to win big. It’s a game the dealership has been playing annually for more than two decades.

“This being our 22nd year, we will be at little over half a million dollars that we have given away in automobiles,” Parker said.

Todd Stewart, dealership owner, said this year is unlike any other. This year, the winner will have a choice between a 2016 Ford Escape or a 2016 Ford Fusion. The vehicles are worth about $25,000.

“It’s the most expensive car we have ever given away,” Stewart said.

People from Thomasville, Camden, Demopolis and other surrounding areas traveled for the chance to win, because they must be present to win.

Parker said while there are a lot of new names this year, a good number of them are repeats from previous years.

Selma resident Rex Osburn has been participating in the annual raffle for the past five years.

Osburn said one year he was close to winning, being in the last five remaining.

Jackie Coleman, on the other hand, said this is her first time participating in the game.

On both Thursday and Friday, 50 names were eliminated from the drawing leaving 100 contestants behind. The drawing will resume Saturday morning at 10 a.m.