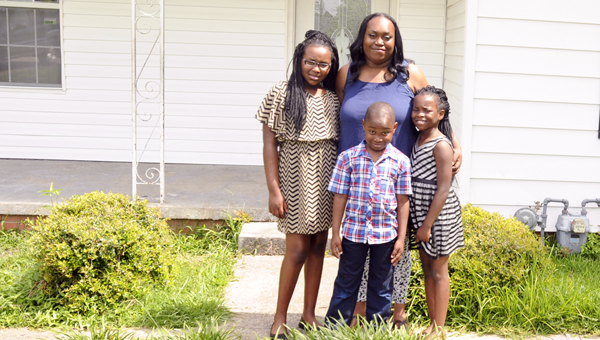 The Johnson family has moved back into their home after a house fire in February. Tiffany Johnson is pictured with her three children Makayla,11, Malik, 6, and Tamyah, 8, who woke her mother up the night of the fire, allowing her family to escape the blaze.

It’s been just over four months since 8-year-old Tamyah Johnson saved her family from a house fire back in February.

Tamyah and her mother, Tiffany Johnson, and sister, Makayla, 11; and brother, Malik, 6, have moved back home after living out of a hotel since the blaze.

The fire started from a heater left near a couch. The living room caught on fire and left the entire home with smoke damage.

Tamyah woke Tiffany up the night of the fire, giving the family enough time to escape.

Tiffany said repairs aren’t quite finished but she’s glad they are far enough along she and the kids could move back home.

Repairs have cost about $17,000, an expense she had paid out of pocket since the home wasn’t insured at the time of the fire. Repairs include new sheet rock, paint, furnishings and more.

Tiffany said her fellow employees at Bush Hog have donated quite a bit to her family. In addition to money, clothes were also given to the Johnsons.

“They were so nice to me and really looked out. [Bush Hog president] Gerald Worthington and others were a big help to get our house fixed,” Tiffany said.

The mother of three said it was hard for the family to leave home and move to a hotel.

“Three kids in a hotel room? When everything happened, they were pretty upset, but that was the only choice we had,” Tiffany said. “It was misery, and we are so glad to be back at home.”

Tiffany said her uncle Michael Johnson also was a big help in getting the repairs made.

“Whatever she needed me to do I tried to help her with it,” Johnson said. “She is a survivor and a real go-getter.”

Michael said he was proud of Tamyah for saving her family and all of them for being so brave.

Tiffany has written a book about the experience called “The Young Hero.” She said she doesn’t believe Tamyah understands the magnitude of what she did that night.

“I wrote the book so when she gets older, she will have it to look back on. Everything that happened encouraged me a lot. It will also encourage others who have been in the same situation,” Tiffany said.

“The Young Hero” is $10 and can be found on Amazon.com and can also be bought from Tiffany.