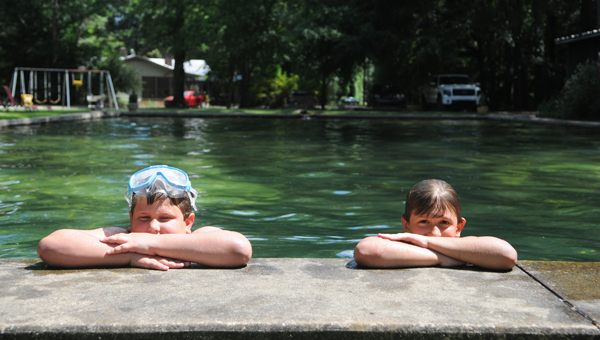 Walt Bowline, 8, and Whitt Bowline, 9, pose for a photo at the edge of their family’s pool. The 81-year-old pool is fed through a artesian well.

Many families have a legacy or treasure that is passed on from one generation to the next.

“I can’t even tell you the amount of people that I’ve talked to over the years that have swam in this pool,” said Carl Bowline. “It’s a historic treasure in our community.”

Over Memorial Day weekend, the pool was drained for the first time since it had major repairs done last fall.

The pool is measured roughly 100 feet long and 50 feet wide and contains 225,000 gallons of water when filled.

The pool begins at two feet deep on the shallow end and slopes down to nine feet on the opposite end. It takes four hours to drain the pool and five to six days to refill. 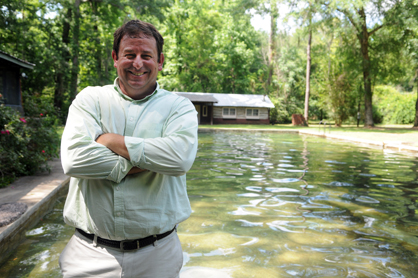 Carl Bowline (right) said countless people share stories about swimming in the pool over the years.

For more than 80 years, the pool has been fed from artesian wells that constantly pump fresh water. The overflow of the water is then sourced back out to a nearby creek. Because the pool is constantly being cycled with fresh water, the temperature stays about 72 degrees year round. Even during the winter months.

The pool was dug in the early 30s by Bowline’s grandfather and great-grandfather. Although it has been in private ownership during its entire existence, it was briefly open for public use.

“As a way to make a little money coming out of the depression, [they would] charge people 10 cents to come on in and use it,” Bowline said.

Adjacent to the pools are two cabins. One cabin was once used as dressing rooms for boys and girls when the pool was open to the public. The other was a pavilion that housed soda machines and a dance floor.

Over time these structures have been transformed into smaller living spaces for visitors or used temporarily by family members.

“Most every Bowline that got married in Selma lived in one of these house at one time or another before getting a regular house or moving on,” Bowline said.

But over the decades, not much has changed. Some features are gone such as the slanted pool sides and diving boards, but many original qualities of the pool and the surrounding structures still exist.

“So many times you hear people complain about what we don’t have anymore and how things have gone to the wayside,” Bowline said. “A lot of the history is still here, you just got to get up and go find it. It may not be as you remember, but it is still here.”

For the Bowline family, the pool is more than just a place to cool off during the summer. It’s a time capsule packed with both family and local memories.

“That’s one of the great things, to hear so many stories from people that aren’t your family. I wouldn’t get a chance to hear those stories if they weren’t circled around this pool,” Bowline said.

“It’s really heart warming to be part of that history.”