Bailey has given 55 years to Vaughan hospital 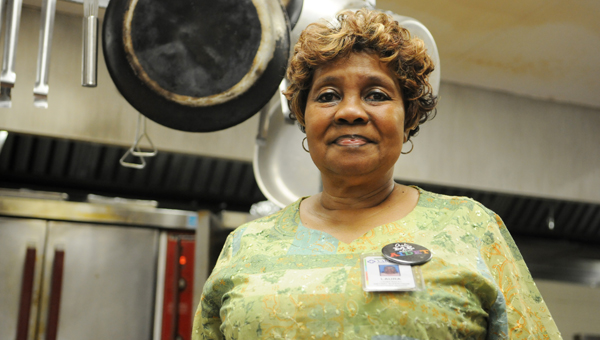 Laura Bailey has worked at Vaughan hospital since she graduated high school in the 60s.

For the past 55 years, 74-year-old Laura Bailey has been dishing up love and care for the patients at Vaughan Regional Medical Center.

Bailey, also known as ‘Mama’ in the dietary department, has been working as dietary supervisor for the past 40 or so years.

However, she started at Vaughan shortly after graduating high school in the early 60s making $11 a week.

“I had just gotten married. I had a son that was six months old, and I knew I wanted to work,” Bailey said. “I got a scholarship to go to school, but I knew I couldn’t go right then. I figured, later on if I worked a while, I could go to college.”

She eventually had her chance to go back to school. After working a few years on the tray line and as a patient representative, Bailey took a correspondence course at Auburn University to become certified in dietary management in the early 70s. Since then she has been working as dietary supervisor.

“It feels good,” Bailey said. “I think this is a good way of sharing love and care with people.”

As dietary supervisor, Bailey manages patients’ diets, making sure they get the proper nutrition for their dietary needs.

Dietary manager Terry Headley said Bailey is one of his most dedicated employees.

“I can always count on her,” Headley said. “She’s done every job, just about, in here. It’s a comfort to me to have her in that position because I know things are going to be took care of.”

Six years ago, Bailey’s hard work and dedication was recognized when she was awarded the Mercy Award. The award is an equivalent of employee of the year.

Headley said Bailey has an outstanding record on showing up for work on time and has hardly ever been out sick.

Bailey’s passion for caring goes beyond the hospital walls. Every third Sunday after church, she and a group of church members go to various nursing homes to sing, visit and play bingo.

In the next five to 10 years, Bailey plans to retire so she can spend time with her two children, six grandchildren and seven great-grandchildren. She said even during retirement, she hopes to continue to care for people as she does now.

“I love people, and I love doing for people,” Bailey said. “[And] helping them in whatever way I can.”