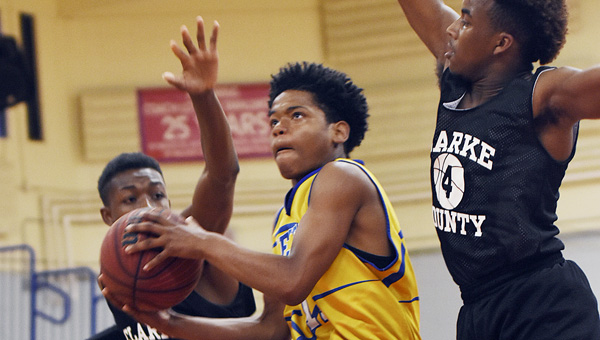 Keith’s Jared Edwards jumps in the air for a layup attempt while being guarded by two players from Clarke County. –Daniel Evans

Keith nearly rallied from a 15-point deficit Wednesday in a game against Clarke County at the Selma Summer Slam basketball tournament.

The Bears had three open looks to tie the game in the closing minutes — including two corner 3-point attempts by Kendarius Perry — but ultimately fell to Clarke County 35-30.

The game was the second of the day for Keith and came right after a 30-point loss to Midfield that had Bears’ head coach Tommy Tisdale looking for better effort.

Outsized by an aggressive Midfield team, the Bears managed around two dozen points in their tournament opener. The team appeared to be going down the same path against Clarke County, but found a spark in the second half.

Jimmie Powell scored eight of his 10 points in the second half, including a spin move in the post, and he added three made free throws. Each free throw in the tournament counted for two points to keep the action moving.

Powell’s final free throw came with 3:16 left and brought Keith to within 33-30, but neither team scored the rest of the way until a Clarke County layup with 10 seconds left.

“I could see the progression,” Tisdale said. “We settled down, we slowed down and we played possession by possession. We played a lot better that game.”

Clarke County led at halftime 20-12 but quickly took a 15-point lead in the second half. Keith started cutting into the deficit with a hook shot by Domonique Jones. Mark Young followed with a 3-point play to bring the lead down to 31-23. A 3-point play by Perry cut further into the lead and made the score 33-28 with 4:24 left.

Keith didn’t make another field goal the rest of the game.

Tisdale said the team is still trying to settle into its roles after losing star point guard John Pettway to graduation.

The Bears made it to the 1A state semifinals last season, but had a relatively new team on the floor Wednesday.

Tisdale knows it’s going to take a group effort for Keith to take on the scoring burden left from Pettway’s absence.

“A lot of guys were camouflaged at times because they didn’t have to do much,” Tisdale said. “But John Pettway is not coming back through this door now.”