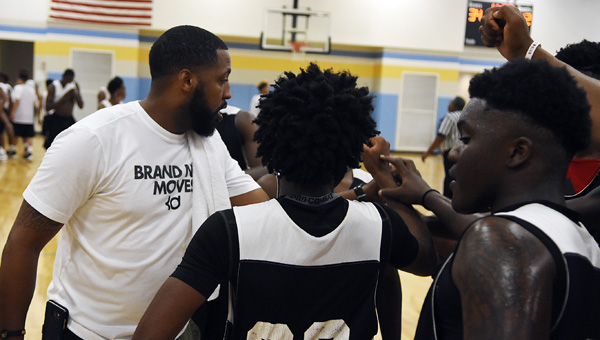 Southside head coach Cedric Brown talks to his team during a timeout in Tuesday’s game against Prattville. –Daniel Evans

After their first game, even Brown had to admit Southside had passed its first test of the year. Southside defeated 6A Prattville 46-37 in a game the Panthers never trailed in.

“Nobody is complaining about who is getting the most shots. There’s no one player that just sticks out but we are playing as a team.”

A hot start by Keshawn Arrington allowed Southside to take a 21-12 lead into the half. Arrington made two 3-pointers, including one that gave the Panthers a 10-point lead in the final portion of the first half.

DeQuan Johnson made a layup to begin the second half to give Southside its biggest lead of the game. Prattville answered with an 11-0 run to tie the game with 16:02 left in the first half and gave Southside its first real adversity of the summer.

“The score doesn’t matter but at the same time, in our minds we knew we were up and they came back,” Brown said. “That’s a run. We’ve got to be able to withstand runs during the summer. What better time to withstand a run than now?”

Following Prattville’s run, Southside’s Nicholas Bennett and Derrick Griffin made shots to put the Panthers ahead by six.

A 3-point play by DeQuan Johnson, who scored all 10 of his points in the second half, sparked an 11-2 run that put the game away.

“Quan is our silent leader right now and I enjoy what he’s doing right now,” Brown said. “I’ve watched him in practice. He’s going hard and the young guys behind him, they are going hard as well.”

Griffin followed Johnson’s make with a 3-point play of his own.  Arrington made a layup to extend the lead to 10 and Mark Wallace followed with a personal 5-0 run to offset Prattville scores to keep the lead in double figures.

Southside also played a game against Midfield later in the afternoon and lost by 12.