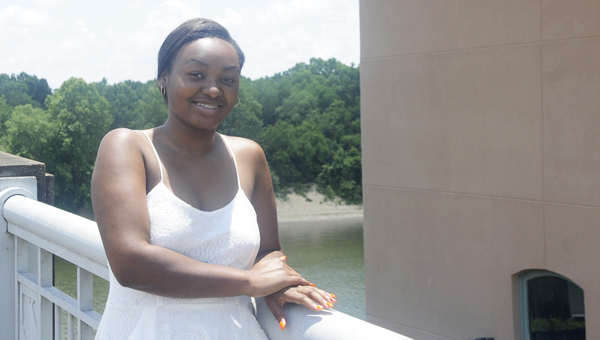 Southside High School valedictorian Kiara Horton is headed to Auburn University this fall, where she plans to study chemistry and pre-pharmacy. She moved to Dallas County from Cleveland, Ohio before her freshman year of high school.

After moving to Selma right before her freshman year from Cleveland, Ohio, Horton said she realized the best thing to help her adjust to the culture shock would be to stick to her academics.

She said the balance between being a teenager and maintaining ‘A’ averages in her classes at the same time came pretty easy to her during her time at Southside.

“I have always been good at school. As far as going out, me and my friends knew how to come together as a group and study and then we also took a break from the books to go to the movies or do other fun things,” Horton said.

She plans to go to Auburn University to double major in chemistry and pre-pharmacy and will have the help of seven scholarships to help pay for her education.

Horton is a member of BETA Club and the International Honor Society. She was one of the Howard Hughes Medical Institute Scholars Program students who graduated from Wallace Community College Selma in May with an associate’s degree.

“It was really easy trying to maintain good grades because the teachers were always there to help us,” Horton said.

Mathematics instructor Ghytana S. Goings is someone who Horton said she considers a mentor.

“Kiara was what I like to refer to as a quiet storm. She doesn’t do a lot of talking, but her work speaks volumes. She turned everything in on time and helped anyone she could,” Goings said. “She was one of those students who always got it, and when she didn’t, she did not stop until she did. She is an extraordinary young lady with an extraordinary and humble spirit,” Goings said.

Horton’s morther Adrienne Dumas is confident her daughter will stay grounded and she is proud of her accomplishments so far.

“I’m glad she kept focus and the move here didn’t deter her from her main goals,” Dumas said. “I just want her to keep putting God first, stay focused and maintain what she has planned for her life.”