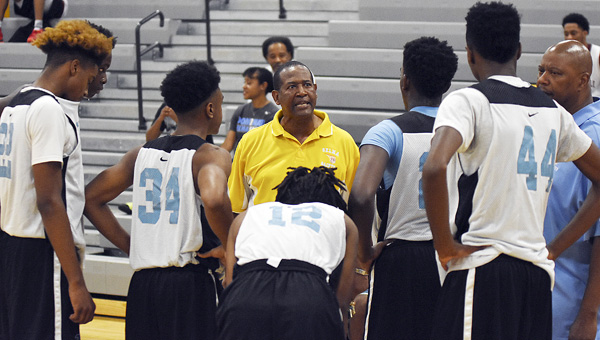 Selma coach Anthony Harris tries to fire up his team during a timeout. –Daniel Evans

Selma’s opener in the Selma Summer Slam Basketball Tournament was a truly a tale of two halves.

More than 12 minutes of game time passed before Selma scored its first basket, as the Saints found themselves in a 21-0 hole to Park Crossing. Selma trailed by as many as 28 in the first half before showing signs of life in the second half.

Park Crossing led by double digits the whole second half and held on for a 51-33 win, but the Saints made it interesting in the final part of the game.

“We got in the press to try to get back into it,” said Selma coach Anthony Harris, who said he is overseeing the boys program. “They showed pretty good in the second half. I think if we would’ve gotten into [halftime] at least [within] 10, we would’ve been OK down the stretch.”

The first half couldn’t have started any worse for the Saints in their summer opener. Park Crossing made shot after shot, while Selma came up empty. The Saints missed numerous free throws and made a habit of turning the ball over.

The second half was a different story. Right from the outset, Selma was the aggressor in the final half. Park Crossing didn’t score for the first eight minutes as the Saints closed the gap to 39-20.

“That was good what they just did,” Harris said of his team’s second half performance.

In the end, the lead was too large for Selma to overcome.

The Saints went on later in the day to defeat Ellwood Christian in a close game.

Harris, who also serves as the girls’ basketball coach at Selma High School, said he is currently overseeing the boys program. Former head coach Woodie Jackson stepped down earlier this year and no official replacement has been named.

“I’m going to oversee both programs — girls and the boys — along with the staff,” Harris said. “That’s the way we’ve got it right now.”