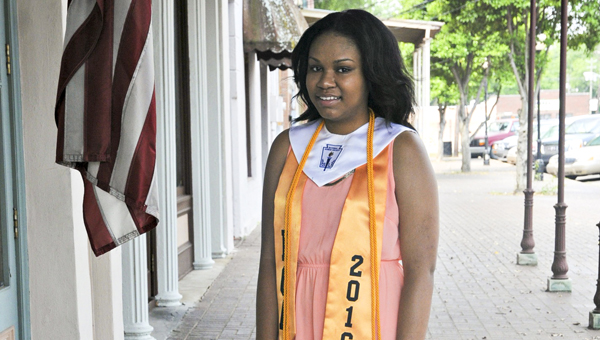 There are fewer prouder moments for a parent than seeing their child walk across the stage at high school graduation.

“It was always my dream to make my mom happy.” Cowan said. “When I was told I was very shocked, surprised and happy.”

Eyanah’s mother is proud of her daughter’s achievements, saying that she’s always been a child that tried her best in everything.

Having attended Ellwood since the ninth grade, Cowan’s extracurricular activities varied from cheer captain to being part of Selma Pilgrimage.

“My favorite high school memory would have to be cheering,” Cowan said. “Becoming cheer captain and cheering with my friends.”

Cowan luckily didn’t deal with much stress during her high school career, but when things would get hard she could always turn to her older sister April or her mother for help and guidance.

Her faith paid a big part in her success as well.

“Ellwood is big about Christianity. We had bible classes and chapel every Thursday,” Cowan said.

Cowan’s summer will consist of working to save up for school in the fall when she will be attending UAB with two scholarships under her belt.

She plans to major in biology with hopes of being a pediatrician one day. Admittedly shy, she feels like college will bring her out of her shell, allow her to show her personality and build her into a better person.