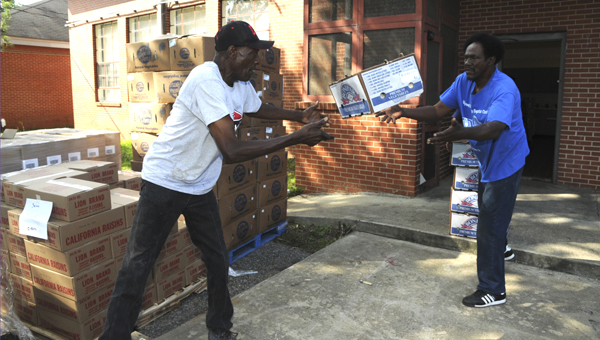 Greens, potatoes, cauliflower, raisins, vitamins and more were made available to the community by donation of the WoodmenLife Fraternal Insurance Society, Selma Chapter 3.

WoodmenLife has a national focus on hunger awareness, giving back to charities and communities through local food banks.

South Alabama WoodmenLife Representative Ashley Pruitt said Thursday was the first time she was able to be on site of a food distribution since she joined the team in February.

“This shows how much a little bit of money can go such a long way. The amount of people whose lives we are impacting and the children who won’t go hungry from this is quite incredible,” Pruitt said.

“It makes me feel good. It’s great to be able to give back to the community in the BlackBelt, which is one of the highest impoverished areas in the state,” Wiltsie said.

Community development center CEO Herbert L. Blackmon bought the building, which was once an elementary school, in 2012. He said it was two years ago that he started setting up food distributions.

“The first month I started, my goal was to serve 40 people but 50 came,” Blackmon said.

He sets up food distributions on the last Wednesday in each month from and said he has seen the average number of people served increase to more than 100.

Blackmon said providing food for those in need reminds him of the reason he bought the center, to give back.

“Doing this fulfills my dreams and visions to put smiles on faces. When they are happy, I’m happy. It’s all about giving back to the community because it gave me a lot,” Blackmon said.

Mary A. Johnson, 72, has been coming to the center to get food for just over a year.

“It means a great deal, especially to elderly people. It is a big help and I appreciate it,” Johnson said.

The center, which is located at 549 County Road 958 in Orrville, operates on sponsor donations along with funding from Blackmon and volunteers.

Selma Area Food Bank Director Jeff Harrison said he feels good to be in a position where he can do his part helping the community.

“When you can take a truckload down there and have an impact on that many people, you’re doing something good. It doesn’t take a big commitment to make a big difference around here,” Harrison said.