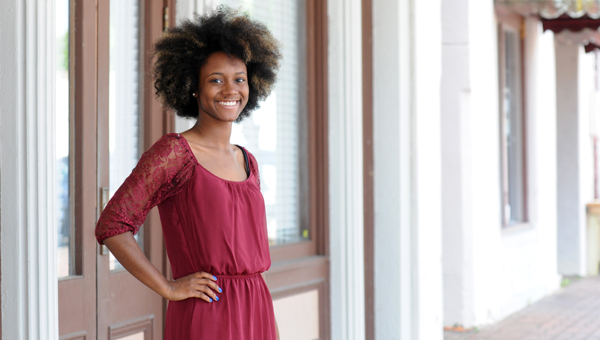 Since the ninth grade, Kalissa Johnson, 17, has had a goal of graduating top of her class. After years of diligent work and the support from her parents, she has been able to accomplish her dream.

Johnson was named valedictorian of the 2016 graduating class of Dallas County High School.

“[Schoolwork] is the only thing I’m good at. I’m not athletic at all, besides singing, that’s all that I know how to do, is schoolwork,” Johnson said. “I was like,’ I’ve got to get this. That’s all I can do, I’m going to be the best at it.’”

Daughter of Kentay Johnson and Anthony Johnson, Kalissa is the oldest of four.

Although she didn’t play sports, she was very active both on and off campus. At Dallas, she was the Beta Club President, National Honor Society student, drum major, choir member, Student Government Association member and Howard Hughes Medical Institute recipient.

Kalissa also shadowed at Wood Orthodontics, was a Girl of the Year competitor and volunteered many hours throughout the community.

As a HHMI recipient, Kalissa graduated from Wallace Community College Selma earlier this month with an associate’s degree in science.

“I’m proud of her,” Kentay said. “The only thing that I can hope for her is that she keeps up the focus that she has now.”

Kalissa said she is looking forward to life as a college student.

“I’m excited because I get to find my own person; find out who I am, by myself,” Kalissa said.

Kalissa said she plans on focusing on her studies the first year of college, but does plan to take part of clubs and groups on campus the second year.

At the end of the 11th grade, Kalissa knew she wanted to be an orthodontist. She said she wants to be able to give people joy and pride with beautiful new smiles.

“I’m a big smiler. I’m always smiling, I’m always laughing,” Kalissa said. “Smiles are probably one of the most important things for me.”