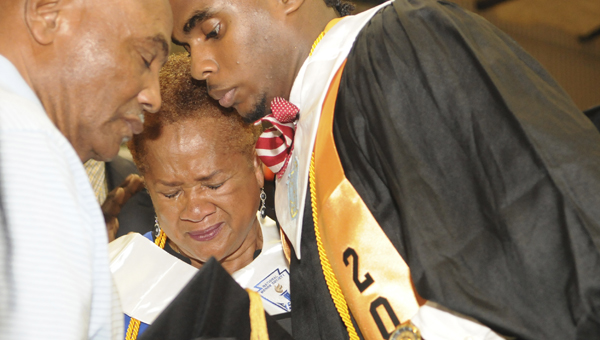 Hattie Pryor, mother of Denetria Pryor, an Ellwood student who passed away April 26, tears up as she accepts a diploma on Denetria’s behalf.

The Ellwood Christian gymnasium was filled with supporting family as 40 graduates walked across the stage and one more was honored as a graduate.

Ellwood’s graduation was a time to celebrate, to honor those who allowed the graduates to reach this point and a time to remember one student, Denetria Pryor, who passed away just weeks away from graduation on April 26 from an illness.

Her parents, Charles and Hattie Pryor, were brought to the stage as their late daughter was honored as a graduate. Classmates joined them on stage to present Hattie with her late daughter’s cap and gown.

Salutatorians Jonathan Pettway and Rayshawn Simmons each addressed the crowd with their speeches. Pettway focused on some of the teachers that made a difference in his life, while Simmons spoke about his mother, who passed away when he was 11, and the advice she gave him that still sticks with him today.

“She told me no matter how great you are, you will never be great if you don’t put God first and be a student athlete,” Simmons said.

Ellwood Christian valedictorian Eyana Cowan followed, encouraging her classmates that their hard work is not yet over.

“I encourage you to not just stay focused on the destination, but the journey,” Cowan said.

Many of the graduates danced across the stage as they received their diplomas, enjoying a moment they won’t soon forget.