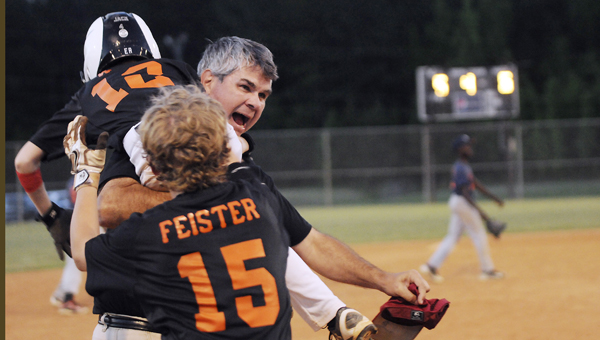 Mee Too head coach Jerome Hand picks up Jackson Wyatt in celebration following his walk-off hit in Tuesday’s 7-6 win over Dallas Avenue Pharmacy. The game was a semifinal in the 11-and 12-year-old age division. Above, Mee Too pitcher Derrick Brown goes through his wind up during Tuesday’s game. –Justin Fedich

Mee Too went into the final inning trailing Dallas Avenue Pharmacy 6-1 with a guaranteed spot in the championship game on the line. Four runs later, Mee Too was a pair of runs away from pulling off an improbable comeback.

With no outs on the board, Jackson Wyatt stepped up to the plate, hit a two-RBI single, and his teammates stormed out of the dugout to celebrate. Wyatt has hit a walk-off before, but it meant a lot to him to hit one in a crucial playoff game.

No. 1 seed Mee Too scored six runs in the fourth inning to win 7-6 over No. 2 seed Dallas Avenue Pharmacy in a walk-off in a semifinal game of the 11-12-year-old youth baseball league playoffs Wednesday at the Sportsplex. Dallas Avenue Pharmacy now needs to win its next three games, including two against Mee Too, to win the championship.

“This team has battled all year and I couldn’t be more proud of them,” said Mee Too head coach Jerome Hand. “We’re glad to be going to the championship game.”

In the bottom of the first inning, Matthew Hand drove home Benjamin Feister to tie the game 1-1.

Dallas Avenue Pharmacy regained the lead in the top of the second inning when Tyrell Woods Jr. slid into home plate after a wild pitch rolled past the catcher. Feister replaced Derrick at the mound and struck out three batters to escape a bases-loaded jam.

Dallas Avenue Pharmacy tagged two runners out between third base and home in the bottom of the second inning to keep its lead at 2-1.

When Roberts stepped up to the plate in the top of the third inning, his father Roman Roberts was the only person standing behind the home run fence. Like a father-son game of hit and catch, Hayden crushed a ball over the right field fence, and Roman, pumping his fists with elation, chased after it.

“He hits them over [the fence] all the time in practice, but this is his first one in a game,” Roman said.

Hayden extended the lead to 3-1 with his third-inning home run, and Joshua held Mee Too scoreless in the bottom of the third inning.

In the top of the fourth inning, Keviyon Haynes hit a double to center field to bring Jataveon Spears and Stacee Rudolph home, extending the lead to 5-1. Haynes crossed home plate as Mee Too tried to throw out Nelson Snow at second to make it 6-1.

The game seemed out of reach, but Mee Too wasn’t done just yet.

In the bottom of the fourth inning, Derrick hit home Feister and Matthew. Derrick scored off an errant throw to narrow the deficit to two. Christopher Ezelle got a base hit and Anthony Lumpkin drew a walk, bringing the potential winning run to the plate. Another walk loaded the bases, and soon after Wyatt hit the ball, he was being hoisted on the shoulders of his teammates and coaches.

“This team has got a lot of heart,” coach Hand said. “More heart than any team I’ve ever had, and they’re a scrappy bunch and they played hard all year long and nothing they do surprises me.”