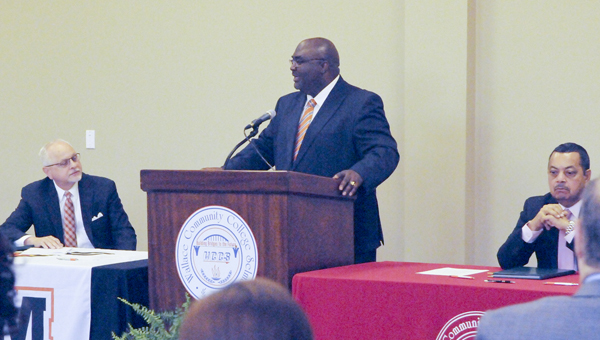 Wallace Community College Selma and Auburn University at Montgomery have partnered on a project that will make it easier for Wallace students to transfer to AUM.

“Wallace has expertise that we don’t have and vice versa so in the context of a true collaboration, it’s about sharing,” said Timothy Spraggins, chief diversity officer at AUM. “That’s what we’re hoping to do.”

WCCS President James Mitchell said as Black Belt institutions both schools are familiar with the issues facing higher education in the area.

“It’s not just a static document in which we sign our names saying students can formally transfer,” Mitchell said. “It’s where students will work with the faculty and staff at AUM as well as AUM working with us here.”

According to Spraggins, at the end of the day the agreement is about building relationships and “people knowing people.”

“As one of the speakers talked about, education is no longer isolated or insulated, and in many cases it takes more than one institution to prepare students for the complexity of navigating a global society,” Spraggins said.

Before now, the schools have had good relationship over the years. Wallace students have visited AUM and learned more about the university. The agreement buildings on that partnership.

“Students coming from a first generation home, meaning neither parent has a four year degree, they may not know how to traverse the process of enrollment and matriculation to a four year institution,” said Raji Gourdine, assistant dean of instruction at Wallace. “So we feel that it’s part of our mission as a college to provide quality programs and service to our population of students.”

A previous transfer coordinator at Wallace, Gourdine would take students around to four year colleges to see how the transfer process worked and explore different campuses.

Because of the partnership that is now in place, it will be easier for Wallace students applying to AUM to apply for scholarships and participate in other AUM programs.

“It opens up a world of possibilities for some students,” said AUM chancellor John Veres III.

“In the short term, we’re trying to create successful students, but when we create a successful student we’re contributing to the workforce and the economy of our state because we’re creating useful citizens who have the tools to contribute to our state’s economy.