Cougar Chevron storms back to defeat Blue Ox in semifinal 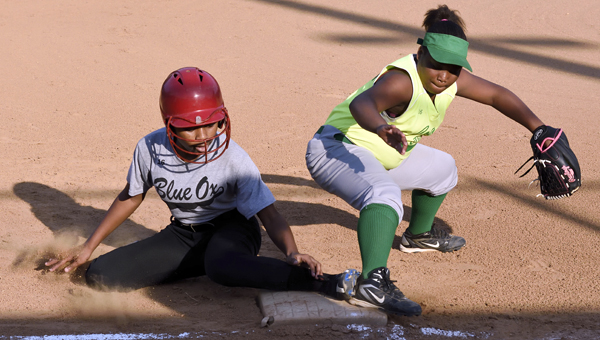 Blue Ox’s Brea Gordon slides into third base safely as TyTianna Johnson tries to tag her out. –Daniel Evans

There’s a chance they’ll play again, but if they do, it’ll be hard to top Wednesday’s fifth meeting.

Markaylee Talton scored on Daiuanna Thomas’ fly out, giving Cougar Chevron a 17-16 win in walk off fashion. On the game-winning play, Thomas lined out to second base and Iyana Woods was nearly thrown out at first in a near double play, which would’ve sent the game to extra innings.

Instead, Woods smartly jumped back on first and Talton ran home, putting the game away and sending the Cougar Chevron dugout into a frenzy. Cougar is now one win from the city title.

“I told them we had the last bat so no matter what we were going to score,” said Cougar Chevron coach Marquis Talton. “They hung in there and did what they were supposed to do. We’ve got one more to win and then we’ll be crowned champs of the city again.”

Cougar Chevron trailed by as many as seven runs early in the game but roared back to take a 14-11 lead in the third inning. Down to their final bat, Blue Ox put together an impressive fourth inning.

A single by Kennedy Thicklin scored Rashni Walker to bring the score to 14-12. Blue Ox kept the momentum going when Tamija Stallworth and Thicklin scored on errors, tying the game at 14 apiece.

Another error on a poor pickoff throw to third, scored Brea Gordon to put Blue Ox ahead 15-14.

Shalencia Coleman, who hit a home run earlier in the game, tagged up from second base for the final run of the top of the inning, giving Blue Ox a 16-14 lead.

“My girls are determined,” said Blue Ox coach Idette Clay. “They get an attitude when they get behind and we’ve come from behind before, but today just wasn’t one of those days.”

Cougar Chevron got the game’s last at-bat and took advantage of it.

Bates pitched the complete game for Cougar Chevron and was credited with the win. She allowed seven runs in the first inning, but gave up only four in the second and third innings combined.

“She’s the best pitcher I’ve got so I had to go with her again,” Talton said. “She pitched yesterday and did good and had to bring her back out again and let her do another good job.”

Cougar Chevron will await whichever team makes it through the loser’s bracket in Tuesday’s championship game.