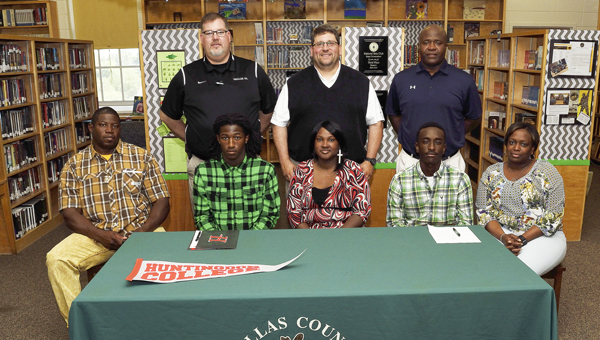 Anthony Oliver, a defensive back, and William Lofton, a wide receiver, had some great battles at Dallas County High School football practices over the years.

“We made each other work hard and everybody else followed because we were seniors and had to lead the team,” Oliver said.

Even with graduation only days away, the seniors are still leading by example.

In front of a packed library full of teammates Tuesday, Lofton signed a letter of intent to play football at Faulkner University and Oliver followed by filling out the required paperwork to play football for Huntingdon College.

Neither will be moving far from home, meaning their families can come watch them play. Oliver said that played a big part in his decision.

“They can come watch the games, just like in high school,” Oliver said motioning to his parents Anthony Oliver Sr. and Monica Holman. “They won’t have to drive that far.”

Dallas County head football coach Marty Smith said both players grew leaps and bounds while in high school. He gave Lofton credit for his maturity and patience while playing in an offense where the Hornets only threw the ball 99 times all season.

“It’s no secret that they are signing him based on his potential,” Smith said. “Unfortunately, there isn’t a lot of film out there on him doing what he can do best and that is catching the ball, catching it in traffic and creating space.”

Smith said Oliver was always a good student and football player, but that he became an even better leader during his high school years. Although he’s expected to play corner, Oliver contributed to Dallas County in many areas.

He had 1,344 all-purpose yards, with most of those coming virtue of kickoff returns and punt returns. He also had 67 total tackles, five interceptions and deflected five passes.

“He’s an outstanding lockdown corner,” Smith said. “That’s where they want to play him and that’s where we’ve talked about, but they also love what he’s able to bring in the return game.”

Both players had drawn interest from Faulkner and Huntington, giving them a chance to remain teammates past high school. Lofton said they talked about their upcoming college decision every day, but decided to go to the school that fit them best.

In the end, that meant Lofton going to Faulkner and Oliver going to Huntingdon.

“It was kind of hard but at the same time, I was like Faulkner has a great atmosphere,” Lofton said.

Oliver will work toward a business management degree and Lofton will focus in on sports management. The scholarships the players agreed to were for academics, as well as athletics.

“What I love about them is it’s not just about playing collegiately, both of them want to get that college degree and do something that a lot of people don’t get the opportunity to do and that’s to graduate from college,” Smith said.