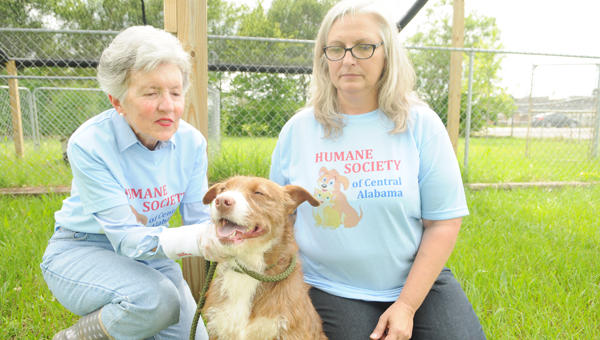 Kaye Knight and Lynn Sanders have been working to improve the Selma Animal Shelter. The hard work is starting to pay off as the shelter adopted out 80 dogs last year, a large increase from previous years.

Humane Society of Central Alabama president Kaye Knight and vice president Lynn Sanders have worked hard over the past couple of years to make the Selma Animal Shelter a healthy environment for dogs and supportive of adoptions.

All that hard work has made this past year one of the organization’s most successful yet.

In April 2015, the Selma Animal Shelter teamed up with the Humane Society of Central Alabama, and the shelter also received a $10,000 donation from a family who prefers to remain anonymous.

Since then, the shelter has adopted out 80 dogs, a large increase from past years, and improved the shelter to make it healthier and safer for the animals.

Knight, who has volunteered with the shelter for the past 15 years, and Sanders, who has spent the last five years as a volunteer, have taken advantage of various conferences across the country to increase their knowledge about different ways to run the shelter more efficiently.

The first stop was at Best Friends Animal Sanctuary in Kanab, Utah, in March 2014.

“When the opportunity came that we could do a week of volunteer work there, we went,” Sanders said.

Among the many lessons Knight and Sanders learned while spending a week in Utah was the importance of allowing the dogs to play together as a group and socialize with each other.

In the past year, Knight and Sanders have been to animal conferences in Birmingham, Montgomery and Atlanta, learning valuable skills about how to treat dogs that are brought into the shelter and how to prevent the spread of disease.

Knight said one change she’s made after attending the conferences is that now she gives each dog a name when it comes into the shelter. She’s noticed that when the dog has a name, the potential adopter is more likely to make a connection to the dog.

“For a long time, we didn’t name them. But we learned from going to some of the conferences that we needed to name them because people seem to pick them if they have a name,” Knight said.

Knight and Sanders have also made more of an effort to bring in dogs from the Humane Society of Central Alabama that are already spayed or neutered.

“If they get a dog that’s already spayed and neutered, that dog is not going to multiply and bring more dogs back in,” Sanders said.

While those who work and volunteer at the shelter enjoy interacting with the dogs, they want to see all their dogs in safe homes as soon as possible.

“I’m glad they are leaving out the door,” said shelter director Nora Curtin. “We hate to hold any dogs here. We’d love to see owners come every day and get their dogs.”

The $10,000 that was donated has been put to good use at the shelter, creating a new spot where people can drop animals off and buying new fans to improve air circulation.

The dogs are now coming in fully vetted, and Curtin said the dogs receive heartworm shots every month they are at the shelter.

Sanders said only dogs that are fully vetted are allowed to play with each other, to make sure each dog stays as healthy as possible while at the shelter.

In addition, the money has helped pay for air lock fences to keep the dogs from getting out and making play time less time consuming for the volunteers.

New computers and printers have allowed the shelter to stay more organized and communicate and share ideas with other shelters.

While Curtin said 80 dog adoptions is more than the shelter has ever experienced in a year’s time, the volunteers at the shelter are still hoping to improve upon that total in the upcoming year.

Sanders said the shelter is still working on renovating its indoor play area to give the dogs another place to be active and socialize with each other.

“I would love to see more volunteers involved in what we’re doing. We’d love to have more people out socializing with the dogs.”