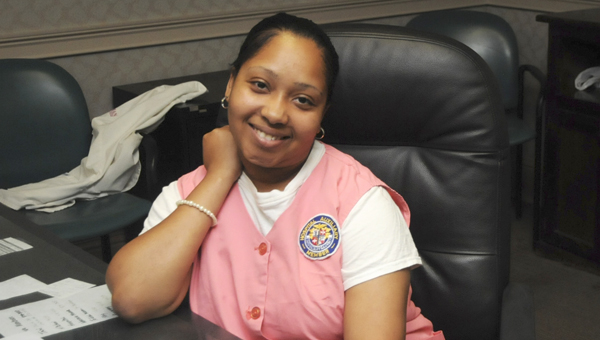 Angela Lumpkin has been volunteering with the Vaughan Regional Medical Center’s auxiliary for about two years.

Angela Lumpkin has found inspiration in the volunteer work she has done over the past two years.

The 26-year-old started donating her time to the Vaughan Regional Medical Center auxiliary because she wanted to do her part in helping people. In doing so, she said she believes she has gained wisdom.

“I really have learned a lot from the older people. They have taught me many things,” Lumpkin said.

She said through volunteering with the auxiliary she has come out of her shell. Lumpkin said she realized she could not provide good assistance if she did not start opening up more.

“I have started to talk more. When I first started I was quiet. I didn’t say anything to anybody,” Lumpkin said.

Through her experience, she said she believes she has gained more than friendships, and now has a family away from home.

“I had to learn people, but now I love them to death and they love me too,” Lumpkin said.

After years of volunteering, she now knows what she wants her career to be. She plans on attending school at Wallace Community College Selma in the future to become a registered nurse.

Lumpkin said being able to work around nurses at the hospital has given her a taste of what it will be like when she becomes one. She has also gotten a chance to earn community service hours, which will count when she starts school.

She volunteers on Mondays and Fridays from 9 a.m. until 5 p.m. Lumpkin registers patients, directs visitors and runs the gift shop.

Although she had never volunteered before joining the auxiliary, Lumpkin said she now understands the importance of giving back.

“It’s important to help out in the community and show others it is good to volunteer and help people,” Lumpkin said. “I encourage people to dedicate themselves to a greater cause.”

Overall, she said she enjoys helping others and that showing compassion is what it is all about.

“It is truly a blessing to put a smile on the face of others. That is all that matters to me,” Lumpkin said.