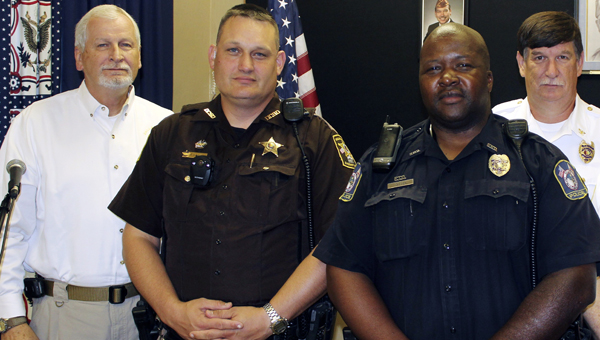 A fish fry was free of charge to all award recipients as well as their family, friends and colleagues.

American Legion member Charles Friday said the program has been around for years and was started to show appreciation to those who risk their lives everyday to make Selma a better place.

“As first responders, they do not get the recognition they really should get. They have very dangerous jobs, and there are not a whole lot of folks who want to do it,” Friday said. “We need to tell them we appreciate what they do as much as we can.”

All recipients had to be nominated by a supervisor before they were chosen.

Each of three recipients were presented with a plaque. Friday said he feels good to be a member of the organization that serves and shows recognition to people in the community.

“It makes me feel proud. One of our goals is to be of service and participate in events that honor various members of the community that have done something special,” Friday said.

Patrol Officer Nathan Gibson has been working with the Selma Police Department since 2008.

“It’s a great honor to be awarded for the second time. It felt great to be acknowledged by my supervisors and peers and to know they have so much confidence in me,” Gibson said.

He grew up in Selma and said he has a passion to be able to give back to the community that helped mold him. He considers himself lucky to be a part of the SPD after serving in the military and moving back to Selma.

“I’m proud to serve the city of Selma. I have shown dedication to my profession. I love what I do and enjoy getting out and meeting people everyday,” Gibson said.

He said he appreciates the Selma American Legion for the recognition they have given to first responders over the years.

“With everything going on in the world today giving the police a bad reputation they have, I feel this is a great thing that shows police officers are out there and we care,” Gibson said.

He was nominated by Chief of Police John T. Brock, who said he is a model police officer.

“Officer Nathan Gibson consistently excels in the performance of his duties. He is the future of The Selma Police Department,” Brock said.

There were two other people who were awarded at the ceremony. Dallas County Sheriff’s Office Deputy Anthony Scott Haskell was named as the Selma American Legion Deputy Sheriff of the Year.

He has worked with the sheriff’s department for the past two years after retiring from the U.S. Navy where he served 20 years.

Dallas County Sheriff Harris Huffman, who said he believed Haskell deserved the award because of dedication he has shown over the years, nominated Haskell.

“He has represented his nation, state, county and city for over 25 years and gone above and beyond his call of duty,” Huffman said.

“He has made several sacrifices to be available for the citizens of this community.”

Selma Fire Department Sgt. Adam Joseph Courington was named American Legion Fireman of the year after being nominated by Chief Toney Stephens, who said he is seen as selfless and determined.

Courington has worked for the Selma Fire Department since 2008 and was promoted to a sergeant three years later.

“Sgt. Courington takes pride in his work and enjoys sharing knowledge with the younger firefighters coming in. He takes advantage of every opportunity to work his way up through the ranks,” Stephens said.