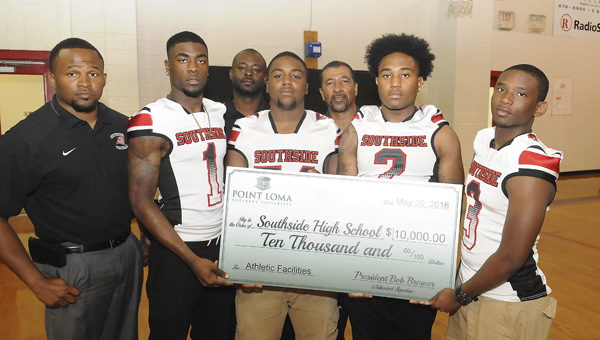 Southside High School coaches and players presented their $10,000 check Friday in the new gym. The check was awarded to them from staff and students from Point Loma Nazarene University in San Diego, who have worked for the past three years raising the money so that Southside could renovate its old gym. — Justin Fedich

Flowers had more players interested in playing football this upcoming season than normal, but Jackson was skeptical, believing that multiple players would quit before the spring game as is usually the case.

For Southside’s spring game, 52 players were dressed for the game — about double the normal amount — and it was immediately clear to Jackson and Flowers why there was suddenly so much interest in the football program.

There is excitement among the football players this season because renovations will finish at the old gym this summer, giving the players a  new locker room and a weight room.

A three-year, cross-country project funded by Point Loma Nazarene University in San Diego ended in a celebration in Southside High School’s new gym Friday morning. Point awarded a large $10,000 check to Southside to allow the school to repair its old gym, which hasn’t been in use for many years.

The fundraising effort began three years ago, when Al Frederick Smith, a 1979 graduate of Southside, called then-Dallas County Schools Superintendent Don Willingham, to ask if he could take a tour of the school. Willingham has since retired.

Smith, who was working at Point, visited with his friend and co-worker Glen Laster. The two wanted to help repair Southside’s old gym, so they decided to go back to San Diego and raise money amongst their student body.

“I didn’t think I was going to see them again, but low and behold, they came back,” Jackson said.

Three years later, the work has paid off.

“Panthers, are you ready?” Laster said three times to bleachers full of students Friday, receiving a louder response each time.

It was clear how much the gesture from Point meant to Southside. The Southside band and chorus performed multiple songs inbetween the various speakers, and the entire football team dressed in uniform for the occasion.

A table with a red Southside tablecloth and two football helmets sat on the center of the court. Next to the table was a podium that welcomed speakers from Willingham to new Dallas County Schools Superintendent Hattie Shelton, Dallas County School Board president Carolyn Bates and vice president William Minor, as well as Jackson, Flowers, Laster, Smith and a host of Point students.

“Wherever you go, make sure to remember to mention Selma,” Smith said. “Selma has opened more doors for me than anything else in my life.”

Near the end of the ceremony, the Point students presented the $10,000 check to Flowers and the rest of the football team. The football players lit up with joy as they passed it around amongst each other.

Each Point student who visited Selma this past week played a role in helping Southside, through allowing students to achieve educational goals and helping renovate the Southside gym.

April Tyler, an upcoming senior at Point, painted murals around the old gym, some of which stated the group’s message of “Selma Strong.”

At the bottom of the ramp in the old gym, where the football team plans to run out of next season when it switches sides, Tyler painted the phrase “Play Like A Champion.” Each player will tap that painting right before they exit the old gym onto the field before each game.

Tyler said she feels called to be compassionate toward others, and her painting was one way she was able to make a difference in Selma.

“Even if it seems super simple, you should still go out and do whatever your talent is because you never know who it’s going to impact,” Tyler said.

The work on the old gym started in December, but it still has a lot of work to be done. Point’s fundraising has allowed Southside to use a large area of the school that had not been in use for a long time.

If Laster’s words hold true, Friday’s check presentation won’t be the last Southside has seen of the staff and students from Point.

“The partnership that we have now, it’s going to last a long time,” Laster said.