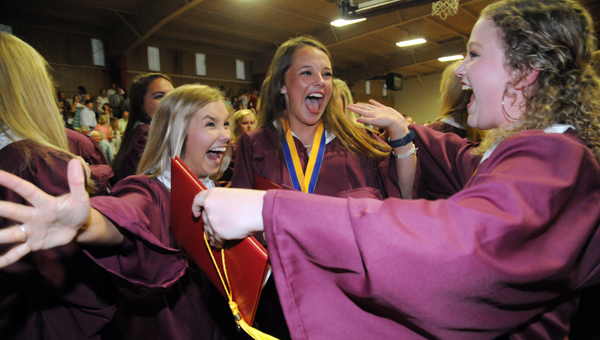 By Justin Fedich and Emily Enfinger

It was a full house Friday night at John T. Morgan Academy. Family and friends congregated to support 53 graduating students as they transitioned from high school into the adult world.

“It just means a lot,” said senior Natalie Henry. “We’ve all accomplished so much and I’m so grateful to have gotten to this point in my life.”

Derry and Annabelle Bone said graduation has been an emotional experience for them as they watch their youngest child, John Ross Bone, conclude another chapter in his life.

“It’s just emotional. We are happy for all of them,” Annabelle said. “We are going to miss all the kids that he grew up with here.”

Meadowview president Steve Johnson said he was impressed with the character of many of the students of the graduating class, and he knows the students will go on to lead great lives after graduation.

“It was a fine ceremony to the end of a great year,” Johnson said. I think we’ve had a great year here in 2016. It’s been a turnaround year for Meadowview. We’re looking for bigger and better things even next year.”

In Hughes’ salutatory address, he encouraged his class to keep pushing toward greater achievements after high school.

“Tonight isn’t the end for us, but instead it’s the beginning of the next chapter of our lives,” Hughes said.

Dabit followed with the valedictory address, describing what her many years at Meadowview have meant to her.

“They say home isn’t a place. It is a feeling,” Dabit said. “That’s exactly what Meadowview is. It’s our home away from home.”

The guest speaker was former Meadowview teacher and coach Elyse McIntyre, who gave her former students advice for their future and reflected on the past.

“There was never a dull moment with this group. They kept me on my toes every day,” McIntyre said.