Oma Dell Pace, 88, of Valley Grande, went home to be with the Lord on Saturday, May 14, 2016. Oma Dell was born in Spruce Pine to Bessie Thompson Conrad and Conard Pounders on Aug. 5, 1927. She resided in Valley Grande. 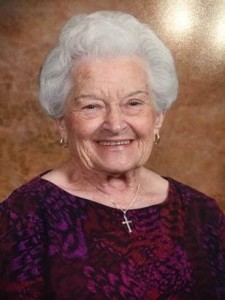 Oma Dell was a loving wife, mother and grandmother. She will be remembered for being a servant to others and being a wonderful cook.

There will be a combined funeral and graveside service, officiated by pastor Anthony Rister, on Monday, May 16 at 1 p.m. at Pounders Cemetery. In lieu of flowers, donations can be made to Alzheimer’s Association, 2151 Highland Avenue South, Suite 210, Birmingham, AL 35206.

Pinkard Funeral Home will be directing.