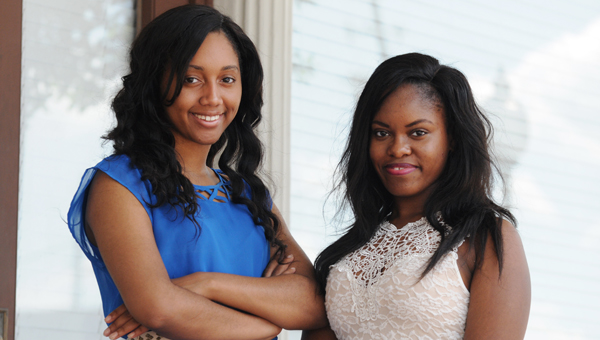 Taylor Steele and Alexzabria Starks were both named valedictorian for Selma High School. Both are headed to Alabama A&M University. –Emily Enfinger

Selma natives 17-year-old Taylor Steele and 18-year-old Alexzabria Starks have been given the honor as the top two students of their graduating class.

“I think we deserve it,” Steele said. “Hard work pays off.”

Steele and Starks are both planning to continue their education at Alabama A&M.

Steele will pursue a degree in mechanical engineering.

Starks will double major in mechanical engineering and chemistry.

“I’m nervous but I’m excited at the same time,” Steele said. “I think I’ll move on to bigger and better things.”

The Selma High School commencement was held on Thursday at the Memorial Stadium.

While at Selma, both girls dedicated many hours to extracurricular activities on campus.

Steele was athletic having done cheerleading, basketball and softball. She also participated in Health Occupation Students of America (HOSA) and the Student Government Association (SGA).

Starks spent her time getting creative. She was active with the school band, choir, Culturama, and robotics. She was also a member of SGA, the National Honor Society and was a student ambassador.

Looking back, Steele said some of her fondest memories were her ninth grade pep rallies when she was a cheerleader. She also enjoyed watching the football and basketball games.

“My favorite memory has to be homecoming because the spirit was really exciting,” Starks said. She said she enjoyed dressing up and showing school spirit during homecoming.

Steele and Starks both agree their favorite subjects in high school have influenced their future.

“I’ve always did my best in math and science, ever since I was younger,” Steele said.

Steele believes her success in her studies will continue into college.

“I think [mechanical engineering] will be best for me,” Steele said. “I think I will be good at it.”

Starks said her favorite subjects are chemistry and biology.

“I’m prepared for it, but there are some things that you don’t really know what to look for sometimes. I think I’m going to do OK, though,” Starks said. “I’m really proud of myself for getting this far.”