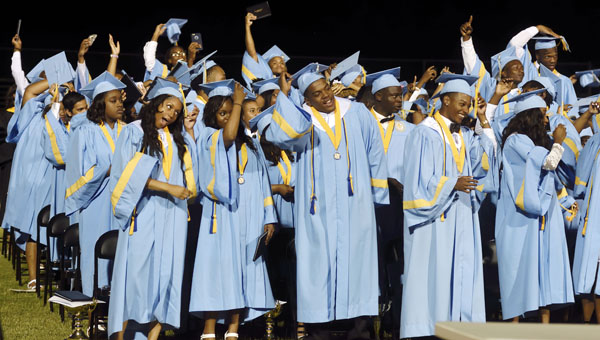 The Selma High School graduating class of 2016 received their diplomas Thursday night in front of crowd that took up nearly the entire home team seating area of Memorial Stadium.

The crowd was so large that the walking area at Bloch Park was used for additional parking. From the size of the crowd, it was clear Selma’s senior class had plenty of community support.

Salutatorian Aderick Moore started the night by looking to the future and challenging his senior classmates to continue pushing forward.

“You don’t get what you wish for, you get what you work for,” Moore said. “If you ever feel like giving up or feel stuck in a situation, remember one of my favorite quotes by Dr. Martin Luther King. ‘If you can’t fly then run, if you can’t run then walk, if you can’t walk then crawl but whatever you do, you have to keep moving forward.’”

Moore also received the J.A. Pickard Scholarship, which goes to a senior each year that finishes among the class top 10 and has shown great character throughout his high school days. Superintendent Angela Mangum talked about all Moore had accomplished, including being senior ambassador, Selma-Dallas County Youth leadership class vice-president and Selma High Class president as reasons why he was chosen for the award.

“It affected us all considering he has touched our lives in some way, but we as a class took this tragedy and turned it into extra motivation,” Starks said. “Motivation to do our best in school, motivation to graduate and motivation to live our lives to the fullest. We did it for him and he certainly is not forgotten.”

When Williams’ name was called Thursday night, it received the night’s biggest cheer. Students jumped out of their chairs in celebration as his parents accepted his diploma.

While part of the night was spent reflecting, there was also plenty of jubilation. A total of 186 students walked across the stage Thursday night and moved on to the next portion of their lives.

“Along the way, we gained skills needed to excel in a modern day society,” Steele said. “It is an honor to challenge you to utilize those hard earned skills to become engineers, doctors, astronauts, educators, lawyers, entrepreneurs or any dream that you pursue.”