Arrest made in Wednesday night murder

An arrest has been made in a Wednesday night murder less than 24 hours after the shooting.

Carloyd De’Edward Moss, 21, a Selma resident, was arrested Thursday afternoon in connection to a homicide on the 100 block of Cummings Circle, which is within the police jurisdiction, the previous night. 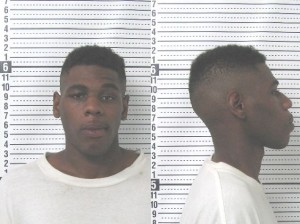 Moss was charged with capital murder and is being held without bond.

The victim has been identified as 26-year-old Tavares Serdarro Peasant, according to Dallas County Coroner William Alan Dailey.

Police responded to a call about a gunshot victim around 10 p.m..

Upon arrival, officers found the victim lying in the front driver’s seat of a car, unresponsive with a single gunshot wound to the head, according to authorities.

Selma Police Department Lt. Sam Miller said the investigation resulted in a quick arrest thanks to tips and leads from community members.

“We would like to thank the citizens for coming forward,” Miller said. “With their help, we can get the job done.”

“We’ll proceed from there,” Jackson said. “The police department has worked hard on this and they have done a good job on investigating this to make an arrest so quickly.”

The homicide is Selma’s eighth or ninth in 2016. A domestic violence shooting that left two dead in April is still under investigation.

Antoine Stallworth, 38, was shot on New Year’s Eve, an innocent bystander caught in a shootout at GWC Homes. He died six days later at a Montgomery hospital. Five suspects were eventually arrested and charged with murder or attempted murder in a string of holiday shootings.

On March 7, T.J. Shelton, 29, and A.J. Lee, 27, were killed near the intersection of Marie Foster Street and Selma Avenue. Investigators believe the car  they were riding in was possibly targeted. No arrests have been made in the double homicide.

Two weeks later, Christopher McNeil, 35, was shot by his brother-in-law on College Drive over what police described as a domestic dispute. Sandy Rhodes has been charged with murder in the case.

The last day of March, Selma High School senior Cedric Williams was shot and killed overnight on the 2500 block of Etheridge Avenue. Police have not made an arrest in the case.

On April 16, Quienten D. “Lubo” Thomas, 37, died after being hospitalized for almost two weeks. Thomas was shot in an overnight drive-by shooting at the intersection of U.S. 80 and Alabama 41 that also critically injured another man. Ken Prevo, Xavier Waller and Corey Pullom have been charged with capital murder.

On April 30, Teresa J. Petersen, 40, and Marty Joe Ramsey, 50, died inside a home on L.L. Anderson in what investigators described as a “domestic violence shooting.” The Selma Police Department has not officially ruled the case a murder-suicide but said no additional suspects are wanted.