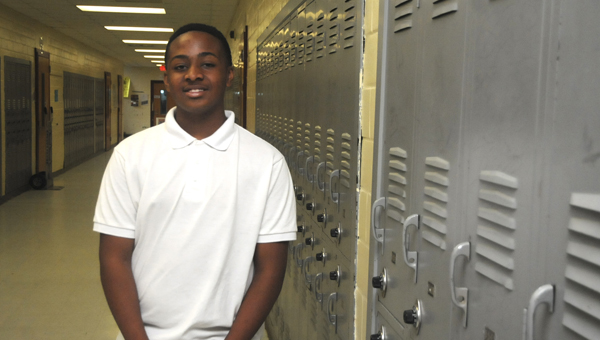 An eighth grader at R.B. Hudson Middle School will get the opportunity of a lifetime next month when he participates in comedian Steve Harvey’s Mentoring Program for Young Men.

Camron Major will take part in the camp, which will take place from June 7-12 in Roberta, Georgia. Carol Vance and Musina Murray both teach Major and thought it would be a good idea for him to experience the camp. They also consulted with Assistant Principal Keith Davis, Major’s mentor, to get his opinion.

Major has been moving between relatives since his mother got sick a few years ago. She passed away earlier this year due to a long-time illness. Major now lives with his sister after staying with his cousin, Anthony Rutledge, for three years.

“He was a straight-A student up until a few years ago. Something disconnected, he was a different person,” Rutledge said.

He said everything has turned around for the better since Major has been at R.B. Hudson and under Davis’ wing. He thinks Harvey’s program will have a positive impact on Major.

“We’re proud. Mr. Davis and other teachers at the school have been very supportive. He has the ability to be whatever he chooses to be. Hopefully, this camp will give him some insight and introduce him to people of good influence,” Rutledge said.

According to www.steveharveytv.com, the program includes a host of workshops that focus on personal responsibility, dream building and the importance of nutrition and physical fitness.

In addition, the participants are introduced to positive male role models who are leaders in various areas, including businesses, their communities, entertainment and the military.

“How many kids from Selma get a chance to rub elbows with Steve Harvey? He got that opportunity, and we’re going to make sure he makes the best of it,” Davis said.

The camp will be all expenses paid. Major said he looks forward to getting a chance to get out of Alabama and seeing what the camp has to offer.

“I will get an opportunity to meet new people. I expect to be mentored, and I’m excited about meeting Steve Harvey,” Major said.

The program strives to help young men see their potential and envision a future where they are physically and emotionally equipped, responsible and productive.

Major will be starting as a freshman at Selma High School in the fall.

“I am thankful to have people like Mr. Davis and everyone else who has tried to make sure I am on the right track. This program will help me get through a lot,” Major said.

Davis said he believes the camp will be a good remedy for all Major has recently dealt with.

“With what he has been through lately, it’s a lot of pressure on a youngster. This will give him a chance to express himself,” Davis said.