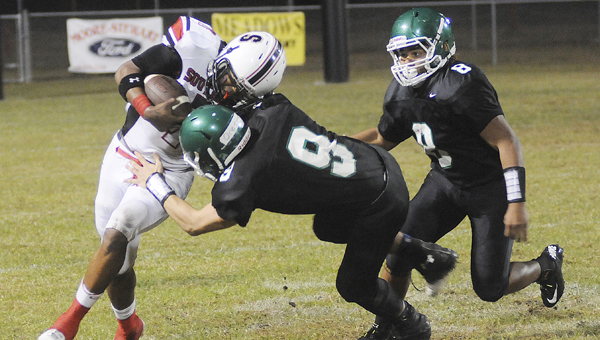 Dallas County’s Patrick Haskell and Delando Atchison tackle Southside’s DeQuan Johnson during a football game last fall. The teams will play a jamboree this year after playing in the regular season for the last decade. –File Photo

One of the longest running football rivalries in Dallas County will continue next season, but it’ll be played in a jamboree format.

The Southside-Dallas County football rivalry is believed to date back to the mid 1960s, but it’ll look a little different in 2016. For the first time in more than a decade, the teams won’t play a regular season contest.

The game has traditionally been played as each team’s regular season finale, but this year it’ll take place on Aug. 19, a week before each team officially begins its season.

“We get to continue to line up in a positive, healthy environment with Southside and when we walk away from that game, both schools are going to be 0-0 and rooting for each other,” said Dallas County head football coach Marty Smith.

Smith said the schools determined it would be better to play the game early in the season as a jamboree and in an environment where fans could come together to celebrate the history of each school.

“We wanted to continue to play and put a situation together where both schools could compete against each other, but celebrate the history of what’s been going on in this county and in our schools for many, many years football wise,” Smith said.

“Having the opportunity to play Maplesville … and it cuts down on costs for travel for Maplesville and Dallas County, it just made sense for both schools,” Smith said.

Southside head coach Daniel Flowers said he’s also happy about moving the game to a jamboree, instead of in its traditional end of season slot.

Flowers said it was important for Southside and Dallas County to continue to play and even said the rival is bigger than the Selma-Southside game.

“To me, that’s the most important rivalry because it’s a battle of county schools,” Flowers said.

The move opened up Southside’s schedule for a new rivalry too. The Panthers will play Ellwood Christian to end their regular season on Thursday, Oct. 27. It’ll be the first regular season meeting between the two schools.