The Selma Police Department is seeking the community’s help in finding a man believed to be involved in a string of robberies and burglaries. 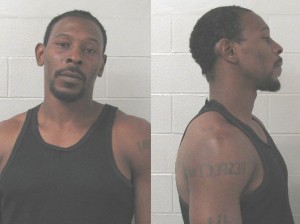 Jamarro Marhshaye Bolden, 34, is allegedly behind at least four robberies and burglaries.

He is described as five foot and nine inches tall and weights 164 pounds. He is considered armed and dangerous.

Lt. Sam Miller with the Selma Police Department said Bolden would drive up to a business in a white Nissan Maxima sometime between 6 p.m. and 3 a.m. The suspect would then ask for items, such as a carton of cigarettes, and flee without paying.

Miller said during the last incident, Bolden allegedly pulled a firearm on a business owner who attempted to follow him.

“Do not try to apprehend the suspect yourself,” Miller said.

“If he comes in and asks for something behind the counter, make sure you receive payment before you hand it to him because he’s probably going to snatch that [item] and run.”