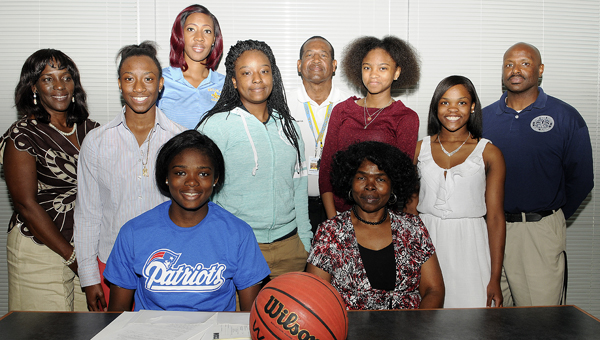 It only took 20 minutes to make the decision.

Harris called Moore, who said she needed to think about it. Twenty minutes later, Moore called Harris back to let him know she would accept the offer.

Moore officially signed her offer for a full athletic scholarship to play basketball at Wallace Tuesday with her mother Teretha Moore by her side. Charmekia had originally planned to attend Alabama State University to pursue a degree in pre-engineering, but the chance to play basketball for another two years was an offer she couldn’t pass up.

Although it’s late in the school year, Turner knew he couldn’t end his recruiting for next year without extending an offer to Charmekia. He has been watching her play since middle school, where he worked at R.B. Hudson. He said the off-the-court qualities Charmekia possesses gives him confidence she will contribute to the Patriots, but he’s also excited about the skills Charmekia will bring to Wallace on the court.

“A lot of times when we had an opportunity to get that second rebound, that third rebound, we didn’t get it,” Turner said.

Turner complimented Charmekia’s ability to rebound, and said she should play a big role near the basket this season. Harris said Charmekia averaged 7.2 points and 8.3 rebounds per game during her four years playing for Selma. He also said she accrued a 96-23 record at Selma, winning three area championships.

During her four years at Selma, Charmekia was never a part of a team that ended with a record worse than 20-5. Harris said Charmekia has learned how to win in high school and it should benefit her in college.

“She will take that to Wallace,” Harris said. “She knows what winning is all about.”

Teretha said she was going to let Charmekia decide on her own whether she wanted to choose Wallace or Alabama State, but she is excited to have her daughter living at home for two more years.

Charmekia is looking forward to playing close to home too, as she is still close with many of her high school teammates.

“I get to play in front of my peers and get to be a good example for my teammates in high school,” Charmekia said.

While Charmekia will be aggressive when pulling down a rebound, Teretha said she makes sure to get other players involved.

“I don’t think she’s ever played selfish basketball,” Teretha said. “She always looks out for her teammates.”

At Wallace, Charmekia will pursue her associate’s degree in science. She still wants to become an engineer, but she would also like to play basketball more than two years. Her high school coach, new college coach and mother all believe she has what it takes to be successful whatever route she chooses.

“I wish her the best of luck and I know she’s going to do well in whatever she does in life,” Harris said.