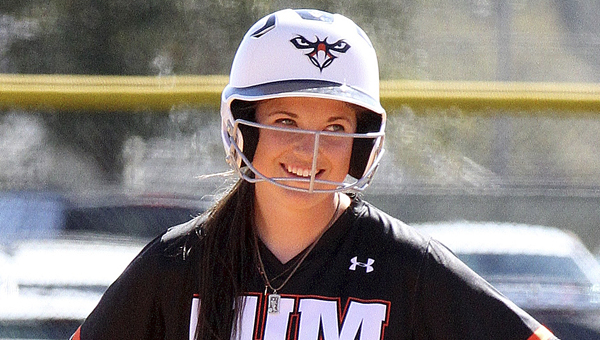 Auburn University at Montgomery’s Amy Persinger smiles while standing on base during a game earlier this season. Persinger and AUM are chasing a third straight national championship.— Robby Persinger | Submitted Photo

Amy Persinger, a Dallas County High School graduate, and Kendall Veach, a Morgan Academy graduate, are playing on softball teams that are likely to go deep into the postseason, albeit in two entirely different associations.

Persinger has started every game for Auburn University at Montgomery, which is chasing its third consecutive national championship in NAIA.

Despite all the history made in the last two years, Persinger and the Warhawks defeated Central Methodist 3-1 on Tuesday and achieved a first by becoming the first AUM team to ever win 50 games in a season. Persinger has played a big part in all of that success too.

She’s started all 55 games AUM has played this season and leads the team in batting average (.349), home runs (10) and has 35 RBIs this year. She’s also scored 36 runs this year, which is the second most on the team.

The Warhawks are in the midst of opening round play in the NAIA Softball World Series. As the No. 2 overall seed in the field, AUM is hosting a regional. The Warhawks are one victory from winning the regional and reaching the tournament’s next round.

The championship game will be played on Wednesday at 1 p.m., but AUM’s opponent was not known at the time of Tuesday’s press deadline.

Veach, a freshman at Auburn University, is making the most of her opportunities this year. She has played in 23 games this season, and has five RBIs in 19 at-bats.

Veach and the Tigers earned a No. 4 seed in the NCAA Women’s College World Series and will host a regional starting Friday. The Tigers (49-9) will host Jacksonville in their opener but will also have to deal with USC Upstate and Oregon State to get out of the regional.