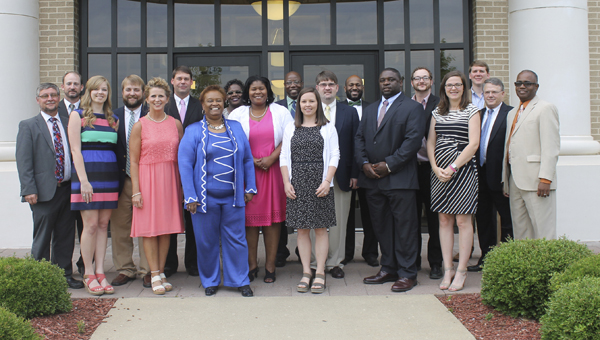 Members of this year’s Leadership Selma-Dallas County class graduated from the program Monday during a ceremony at Wallace Community College Selma.

Members of the Leadership Selma-Dallas County Class XXII graduated Monday after months of learning about the city they live and work in.

Recent graduates started the program back in July 2015. Over the course of the year, they have learned about economic development, agriculture, city and county government and more.

Interim Director Callie Nelson, who oversees the program, said the leadership class served as an eye-opener to some of the members.

“They saw there were a lot of people who have a passion for Selma and Dallas County just like they do,” Nelson said. “They learned there are a lot of things they can’t accomplish individually and in order for the city and the county to move forward, everyone must come together.”

In order to graduate from the program, members cannot miss more than 16 hours and must come up with service projects to dedicate to different causes within the community.

The class created The Blessings in a Box Bail Out fundraiser, which raised more than $6,000 dollars. The money raised will go toward needs of the patients at Vaughan Regional Medical Center. The class has also made donations to the Selma Area Food Bank and the YMCA of Selma-Dallas County.

“Graduation culminates all of their time together. They can reflect on their growth as leaders, personally and professionally,” Nelson said.

The graduation ceremony was held at Wallace Community College Selma and Michael Briddell, director of public information and external information for the City of Montgomery, was the guest speaker.

Chet Chappelle with Rountree Outdoors was named as the Harriett Bates Rising Star of this year’s class at the graduation. The award is named after a founder of the leadership program and spotlights someone from each class who is believed to have shown outstanding leadership traits.

“For my classmates to nominate me for the award felt great. I wasn’t expecting to win. We want to encourage other people in the community to try to make it a better place and have better attitudes about our community,” Chappelle said.

Ashley Mason with the Morris Agency said her experience within the class was helpful, teaching her things about the community she never realized before.

“I’m glad I had the opportunity to go through a leadership class. It taught me a lot about what we have in Selma and Dallas County. I learned a lot about myself and my classmates,” Mason said.

According to Nelson, every class member has to be nominated before they can be a part of the program. She said anyone ages 19 and older can apply to be class members. Those accepted into the program must pay a $525 fee for the program.

Prospective members for the next leadership class would have to be nominated by alumni of the program and must apply by June 1. Applications can be picked up from the Selma and Dallas County Chamber of Commerce, located at 912 Selma Ave.

For more information on the Selma/Dallas County Leadership program, Nelson can be reached at (334) 875-3200.