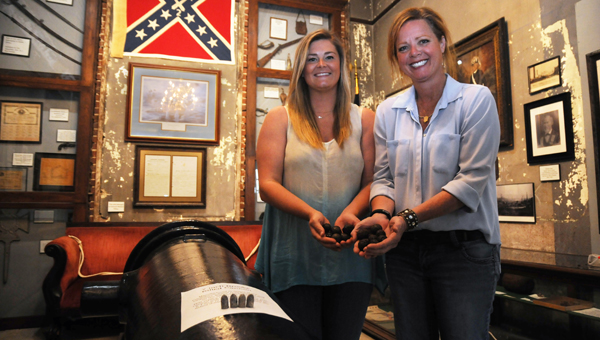 The Old Depot Museum on Water Avenue houses a collection of artifacts that tell the story of Selma from before the Civil War through today. Thanks to a recent donation, the museum continues to expand its collection of local history.

On Monday, Catherine Gordon donated Civil War cannon ball shots and bullets to the museum on behalf of her father, Robert Gordon, a history fan.

“My dad has an extensive Civil War collection, and he wanted this to give back to the public,” Catherine said.

Museum curator Beth Spivey said Robert has given artifacts before and is fortunate for his donations.

“It’s an honor that people trust me with their artifacts,” Spivey said. “It’s a very proud moment.”

Spivey said Robert’s donation came at a good time. The museum recently received artifacts from the Sons of Confederate Veterans from the Vauhgan-Smitherman Museum. Those artifacts include a cannon, journals, weapons and tools.

Spivey said one of the new display items, a Union rifle, has a peculiar story.

“[A Union soldier] went into this family’s house and was being abusive toward this family’s daughter. So they killed him,” she said.

According to the story, the family took the soldier’s gun, burned his clothes in the fireplace and then buried the soldier somewhere around Mabry Street.

“That’s how a southerner had this union rifle,” Spivey said.

Catherine said these kinds of donations are an important contribution to the community’s knowledge of its local history.

Catherine hopes the recent additions to the museum will encourage people to visit, look and learn.

Spivey said the museum is constantly growing and constantly getting new items for its collection.

“Just because you came a year or two ago, nothing is ever the same here. I’m getting stuff all the time now,” Spivey said. “We’re moving things around. We are using the money we made off the fundraisers to do a lot of upgrades on security and on the building. But we got a lot of new artifacts in the past three months.”