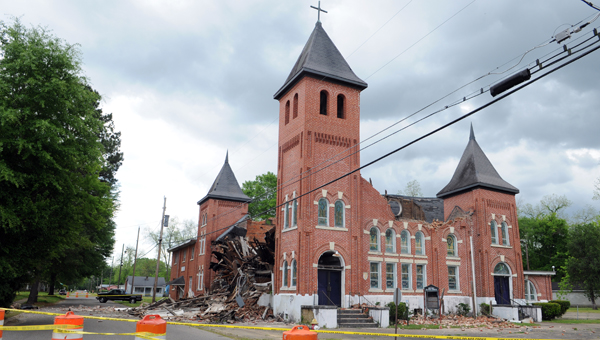 The roof of Green Street Baptist Church collapsed back in April.

It’s been almost a month since the roof of Green Street Baptist Church collapsed shortly after a Wednesday night Bible study.

Since then, church members have worked to clean up the church while finding another place to come together for worship.

Church pastor Willie Harris said contractors have been consulted to help clean up. Work was expected to begin Monday. The church is also trying to get an estimate about how costly repairs would be.

Since the collapse, services have been held at 1530 Lawrence Street, which is the old location for Gospel Tabernacle Church of God in Christ. Services have continued as normal: Sunday morning worship at 11 after Sunday School and Wednesday night Bible study at 6 p.m.

Since Gospel Tabernacle moved out to Summerfield Road in November 2014, the building has housed a program to help feed the needy in the community.

Pastor John Grayson is allowing Harris’ church to use the facility free of charge.

“We are trying to help. I thought it was a great opportunity to be able to share some of what the Lord has given us. We’ve been blessed with another church and the old one was just sitting there,” Grayson said.

Grayson said his congregation had considered expanding community outreach in the space, but those plans changed after the church’s collapse.

“Our services have been great since the transition. They have been rejuvenated,” Harris said.

Green Street repairs would take at minimum of two years Harris estimates, if enough funds are raised to bring the historic church back to life. Green Street was erected and dedicated in June 1922.

Members had been meeting in the church’s fellowship hall for several years because of structural issues with the main sanctuary caused by a tornado 15 to 20 years ago. The building was not insured.

“We are reaching out to members, former members and anyone else who has been associated with the church,” Harris said. “Many are concerned and pledging to help.”

Harris said there would be fundraisers in the near future to benefit the rebuilding effort. Donations can also be made at Trustmark Bank.

Harris said while members were distraught after the collapse, the experience has been motivating for him and his congregation in the weeks since.

“Members are encouraged and inspired and looks at it as a new vision to look forward to,” Harris said.

GSBC has about 50 members who have remained faithful since the loss.

“Ironically, we have even been experiencing some members to come back since this happened. We haven’t had anyone to fall off at all. It’s amazing. We haven’t missed a Sunday,” Harris said.