Selma’s new athletic director has worked up through system 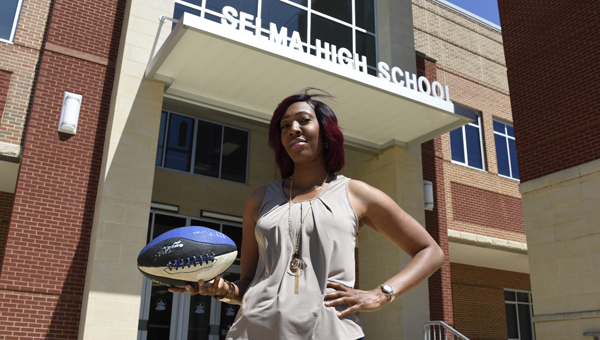 When it comes to athletics, Melissa White has done a little bit of everything at Selma High School. She’s coached basketball, track and volleyball and worked under several different athletic directors.

All that hard work has paid off. White was named the school’s athletic director on Tuesday night and may be the first female to hold that position in school history. If she’s not, she’s one of the first.

“It’s a big accomplishment,” White said. “I don’t think it’s really set in for me yet, but to be a trendsetter, that’s major for me.”

White will oversee an athletic department that will look much different than in past years. Woodie Jackson and Leroy Miles, two coaches that had been at the school for well over a decade combined, have moved on.

“I think she has a lot of ethical practices and she is going to do things right,” Alexander said. “Whatever is asked of her, it is going to be done right.”

Alexander said while she understands football and basketball will likely remain Selma’s most popular sports, she wants to have a program where money is available for all of the sports programs.

“I want an equitable program and she understands [that],” Alexander said.

White’s responsibilities will include doing all the paperwork, making sure players are eligible and getting coaches any equipment they need.

“Basically, doing a lot of leg work and using this right here,” White said while holding up her cell phone. “I get a lot of emails now and do a lot of text messaging and phone calls.”

White said she wants Selma High School’s program to rival the best from around the state, including the biggest schools. Handley has talked about playing more football games outside of Dallas County so that Saints’ athletes get more exposure.

White pointed out that other sports, like Selma’s basketball program, already play games against teams from all over the state.

“We want to play the powerhouse 6As and we want to be able to be strong enough to play the 7As,” White said. “Just to let us see what we have and what we are able to do and the things we need to work on as a program.”

In her short time in her new role, White said she’s been welcomed with open arms.

“I have been embraced by all the male coaches,” White said.

“They’ve shook my hand and told me congratulations and offered their assistance so to me that says a lot.”

White has been an educator for 13 years and has worked at Selma High School for the last decade.  She has a bachelor’s degree in physical education and master’s degree in administration and supervision from Auburn University at Montgomery.