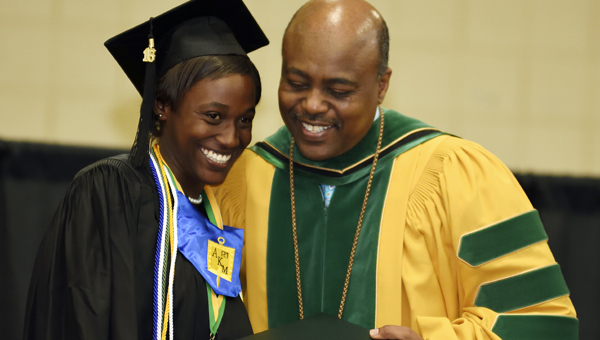 It was a day of firsts at Concordia College Alabama, but Saturday’s graduation ceremony was also an opportunity for longtime president the Rev. Dr. Tilahun M. Mendedo to say goodbye.

Mendedo served as the commencement speaker Saturday, nearly a month to the day after his resignation plans were made public. He spoke to the college’s 79 graduates about the importance of reflection but emphasized keeping their focus on what lies ahead.

“The sky is the limit and I tell you in this country and in this land there is no limit if you want to make it, if you want to drive forward and make a difference,” Mendedo said. “Keep on pressing forward.”

Desiree Elaine Wilson received one of the new degrees — one of four graduates to obtain the new business administration degree — but then quickly changed out of her graduation robe and into a military uniform for a special ceremony.

Wilson was commissioned as a second lieutenant in the United States Army and is a graduate of the college’s ROTC program. A pinning ceremony was held for Wilson, signifying her new rank. She was the first lieutenant commissioned in the history of the program at Concordia.

“I really turn around and look at those coming behind me and I want to set an example that it’s possible,” Wilson said. “A lot of people went through this program and they haven’t made it this far so they don’t take the program here seriously, but now somebody has actually made it through so they can see that’s it possible.”

It was a day of celebration for all who attended, but the focus remained on the graduating class. Many pointed or waved to loved ones as they crossed to stage and others danced their way across.

“It’s been exciting because I’m glad to be done but it’s been emotional because I worked hard for this,” said Keyanna Janae Kimbrough, who graduated with a bachelor’s of science degree in education.

Last year, she cheered her mom, Theresa Kimbrough on as she crossed the stage and received a similar degree in education.

“She’s just leading the way for me,” Keyanna said.