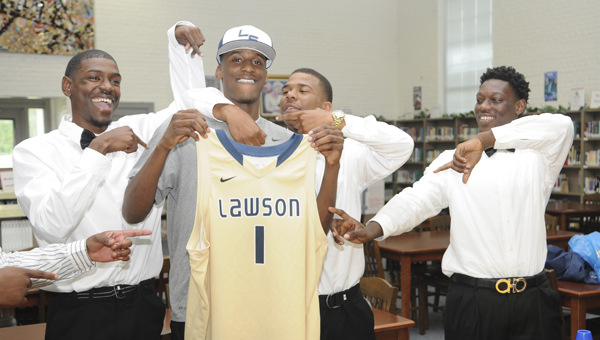 Minutes after Southside senior Charles Price finished signing an athletic scholarship to play basketball at Lawson State Community College, he darted out of the school library without telling his parents or coaches where he was headed.

Price returned moments later with four of his senior teammates on the basketball team, Khamari Gibbs, Chris Davis, Kentavius Page and Lee Underwood. It wouldn’t have felt right, Price said, for him to celebrate a milestone in his life without four friends who helped him reach this point.

“I had to bring them in here and enjoy the moment with them because without them I wouldn’t be here,” Price said.

On Thursday, Price was joined by his parents, Anderson and Diane Price, his coach, Cedric Brown, and Lawson State head basketball coach Phillip Shumpert, as he signed a full scholarship to play basketball for the Lawson State Cougars.

“It’s a blessing that God gifted me with talent to even be seen by any coaches,” Price said. “To be blessed to get an offer for a full ride, words can’t even describe.”

Shumpert said Price was given an offer to Lawson State in mid-February when he came to visit the campus. Price was deciding between Iowa Central and Lawson State, but recently made his final decision based upon where he thought he fit best.

Brown agrees that Price will fit in well with his new team. Shumpert is looking for a tall, athletic player with a high motor who can play multiple positions, and Brown believes he’s taught Price to be just that.

“He likes those big 6’5”, 6’6” guys who can play multiple positions,” Brown said. “Me pushing him here as a stretch four will allow him to excel a lot on that next level, seeing how that’s how Coach Shumpert likes to play. Up and down.”

Shumpert expects Price to contribute right away for his team. Five years ago, Selma High graduate Charles Eaton was the leading scorer for Lawson State as a freshman, and Shumpert is hoping Price has makes a similar impact in his first year.

“We’re very excited,” Shumpert said. “Anytime you get an opportunity to get a kid who’s as athletic and plays with such a high motor and intensity, you always want a kid like that in your program.”

For Price, Thursday was an exciting moment for him because he said it’s a blessing just to be able to go to college. He said he chose Lawson State because of the comfort level he felt while he was there.

“They cared about me,” Price said. “They showed that they really wanted me to come play for their program, build around me and see how I can play at the next level.”

While Lawson State is a two-year school, Price has ambitions to play after his two years at Lawson are up. The 6-foot-5, 185-pound Price said he will work to become bigger, faster and stronger so that he can continue to play the game he loves at a competitive level for as long as he can.

Brown said he thinks a junior college is where Price fits in right now, but he has no doubt Price has the ability to go further if he puts in the work.

“Sometimes you need that junior college level, that extra work that’s going to push you to get to that next level and I believe Coach Shumpert and his program, they’re going to be inspirational in getting him to that four-year school.”

While Price was the only basketball player signing a scholarship at Southside Thursday, it’s an accomplishment Price knows took more than just his talent and work ethic alone to achieve. Brown is hopeful that his younger players can look up to what Price has accomplished and strive to reach similar goals.

To see this group of seniors leave, along with Charles Price being a figurehead, leading the pack, it’s just wonderful to see,” Brown said.