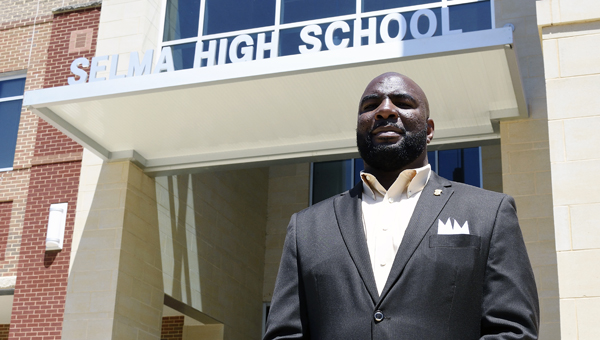 New Selma football coach Keon Handley poses for a photo in front of the school Friday afternoon. Handley met the team for the first time later Friday afternoon and then made the trip to Montgomery to see the Saints in action in their spring game against Robert E. Lee. –Daniel Evans

It was a unique situation Friday for the Selma High School football team and head coach Keon Handley, who was named the team’s new coach earlier this week. Handley met players for the first time Friday afternoon — just hours before they took the field for a spring game against Robert E. Lee in Montgomery.

Then, he made the trip to Montgomery, but only as a spectator.

“It’s actually a great situation because I get to watch them live in action,” Handley said of watching his new team play without actually coaching them. “I get to get mental pictures and reps of how we handle certain scenarios and situations.”

As of Saturday morning, Handley won’t be watching anymore.

He already has a plan laid out for the summer where the team will workout four times a week as coaches implement his new up-tempo offense and install a new defense.

“After [Friday] night, there will be no starters,” Handley said. “We are going to re-evaluate all talent.”

Although his focus will be on the Saints, Handley will also be installing offense at R.B. Hudson Middle School — Selma’s feeder school — because he wants both teams on the same page. Once R.B. Hudson players learn Handley’s offense, they will already be up to speed when they get to the high school level.

“Tempo is going to be our lifestyle,” Handley said. “I’m not your traditional tempo coach. As far as I’m concerned in the middle school, we don’t ever have to run the ball. I want us to be the fastest thing on the field, playing fast and throwing the ball around at the middle school level.”

At the high school level, Handley wants the running game to become an explosive play for the Saints’ offense. His plan is to run as many plays as possible and to try to wear the defense out.

It’ll be a big adjustment from the offense run by his predecessor, Leroy Miles. The Saints averaged 17.1 points per game last season but the majority of those came in wins over county rivals Southside (35) and Ellwood Christian (46). In the other eight games, Selma averaged only 11.25 points per game.

Handley is already thinking bigger picture too. While he said he respects the county rivalries the Saints have built through the years, he wants the program to play schools outside of Dallas County.

“No knock on the county at all, but I want to get outside of the county,” Handley said. “We have enough talent here at Selma where these kids need more exposure. I would like to see within my five year plan for us to have a ESPN game.”

Handley said he’d like to play teams outside the state of Alabama in non-region play, so that more athletes at Selma can be seen by college scouts.

Outside of football, he will be teaching math at the school.  Selma High principal Emma Theresa Alexander said he was the perfect fit because the school had a need for a football coach and math teacher.

“I got the best of both worlds,” Alexander said. “He interviewed very well and his portfolio was nice. It was actually curtailed to Selma High School, and I was really impressed with that.”

Alexander said Reggie Glover, who had acted as head coach since Miles left in February, chose to go into administration rather than pursue the head football coaching job. She said Glover was named Selma’s assistant principal earlier this week.

Handley said he’s looking to bring in other coaches for his new staff and does expect there to be some turnover.  Clifford Matthews will be the team’s defensive coordinator.