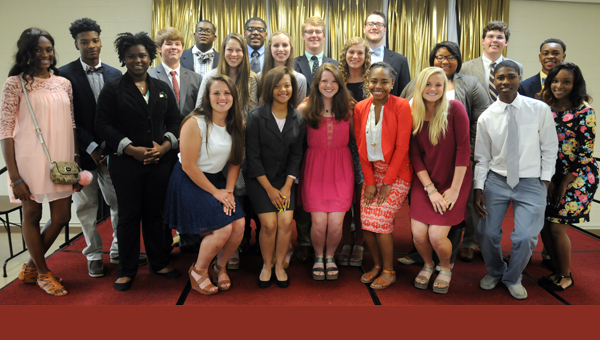 After months of community service and developing new skills, the members of Selma-Dallas County Youth Leadership class XIX completed another chapter in their lives by graduating from the program.

“They’re really excited to say they’ve been through our leadership development program,” said board of director member Callie Nelson. “They’ve learned so much about their community and what it’s going to take to be successful.”

Nelson said the program was a launching board for the high school juniors and seniors, giving them leadership skills as well as an opportunity to network and create new friends.

“It really brought me out. I used to be real quiet,” Young said.

The program began in August. The students met once a month for class and to work on a group project.

At the graduation, students gave a presentation on their group project as well as individual projects.

“Our project was an environmental literacy project,” said Morgan Academy junior Cameron Bohannon. “We decided the two worst problems were the environment and the education system. We formulated a plan to mix those two together.”

Bohannon said the group collected and read books on asthma to elementary age children. For his individual project, Bohannon and two other students grouped together to work on a project inspired by the class project.

“We read to kids at the Byrd School because we felt that would be a good place to show kids its alright to read and that reading doesn’t stop after elementary school or middle school and that you can always read and reading is cool,” Bohannon said.

He said the project was a success.

“The kids loved it. They couldn’t get enough of being around the older kids and people showing them attention and reading to them,” Bohannon said.

He believes the leadership program has been beneficial for him, like it has for other students, and said Nelson has been a great asset to their learning.

“I learned a lot of valuable information from her and I have become a better person because of this program,” Bohannon said.

Nelson said the program is currently looking for juniors or seniors who are interested in participating in the next class. Those interested can contact her at the extension office.