Southside’s Davis sets a high bar for himself 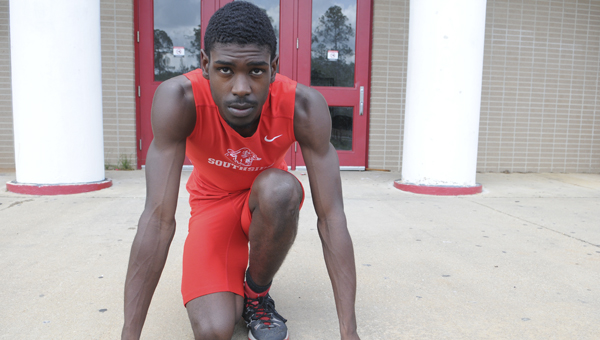 Southside’s Chris Davis competed at the class 4A state track and field meet the past two seasons, becoming one of the most accomplished athletes in the sport in Dallas County in recent years. — Justin Fedich

At Southside High School there is no track. There’s no high jump, long jump or triple jump setup. Chris Davis, a senior at Southside, found a way to compete against the best athletes in the state at all three.

Davis, an 18-year-old senior captain of the Southside track and field team, has been one of the most accomplished athletes in the sport in Dallas County over the past two years. At last weekend’s class 4A Alabama High School Athletic Association state meet in Gulf Shores, Davis finished second in the triple jump and fourth in the high jump.

One year ago at the state meet, Davis placed second in the high jump and fourth in the triple jump.

He is also competitive in the long jump, but didn’t compete in the state meet at that event.

All this success comes in spite of the fact that Davis was only able to practice on high jump, long jump and triple jump equipment once a week at Bloch Park. In addition, Davis has only been competing in the jumping events since the start of his junior year, but it didn’t stop him from beating many athletes who have more experience and easier access to equipment.

“I didn’t have the same opportunities to do the things that they do and actually practice on it every day, but knowing that I still ended my year where I wanted to end it at, that’s a good feeling,” Davis said.

Davis, who also played on the Southside basketball team for all four years of high school, started his track career running the 800 meters and 1600 meters. While he said he was good at those events, he knew it wasn’t going to get him as far as he wanted to go.

“I was doing enough to get by, but not enough to actually excel at it,” Davis said.

Coaches took notice of how high Davis was jumping when he was playing basketball, and it became evident where he needed to transition to if he wanted to make it to a state meet.

After a strong showing in his first state track meet junior year, Davis came back his senior year with the bar set high once again.

“I knew where I wanted to end my track season. I knew I wanted to end it at state, so whenever I got the chance to actually work on the events that I did, that had my full attention,” Davis said.

With the sting of an early exit in the basketball postseason, Davis had the extra motivation he needed going into track season.

“I wanted to leave knowing that I accomplished something my senior year,” Davis said.

At the sectional meet, Davis posted a personal best 44 feet, four inches in the triple jump.

Over the season, he also earned a personal record of 20 feet in the long jump and 6 feet, two inches in the high jump.

Southside head track coach Jeremy Sturdivant describes Davis as a coachable athlete, and one who’s always responsive to criticism because he has a drive to constantly get better.

“I knew he wanted to go to state and be there and he did what he set out to do,” Sturdivant said. “I was very proud of him.”

In the high jump, Davis reached a mark of six feet, earning him fourth overall. A day prior, Davis hit 43 feet, 11-and-a-quarter inches. The mark fell shy of his personal best he had recently set, but it was good for second place at the state meet.

Sturdivant said for Davis to overcome the fact that Southside doesn’t have the same equipment some other schools offer field athletes makes it even more impressive what Davis pulled off in the past two years at the state meets.

“It shows a lot of grit,” Sturdivant said. “A lot of determination. A lot of hard work in itself of overcoming the obstacles and telling yourself that you’re not the person to make excuses.”

In the fall, Davis will attend the University of Alabama at Birmingham and pursue a degree in computer science. He doesn’t have an athletic scholarship to compete in track and field, but Davis won’t count himself out of finding his way on the team before he graduates.

“Track is something that I love to do, and I would love to continue doing it,” Davis said.