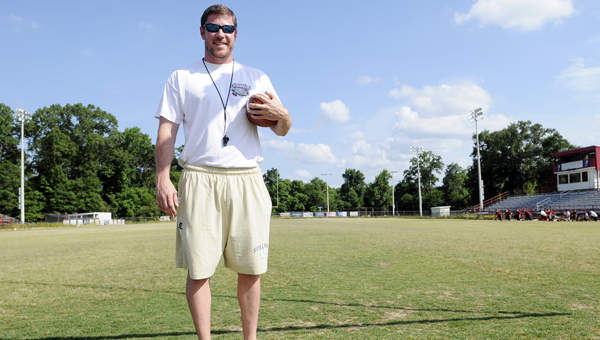 When the Morgan Academy football team started to break into three groups Wednesday to begin its second spring practice, new head coach Josh Thacker called his players out and brought them back together at the middle of the field.

“You never leave a huddle without breaking it,” Thacker said to his team.

The team reconvened and broke the huddle on one word: family.

Thacker began his first full day of work as the new Morgan head football coach and athletic director Tuesday after three years holding the same positions at Pickens Academy in Carrollton. Thacker was hired last week, replacing Jake Wingo, who took a job as the defensive coordinator at Leeds High School after two years at Morgan.

“They’ve got a great coaching staff here, so it just seemed like a good fit,” Thacker said.

Thacker said Wingo is a close friend of his, and Wingo played a role in getting Thacker to come to Morgan. The two grew up near each other, and Thacker said he’s looking forward to following Wingo’s footsteps.

Wingo is excited to see what Thacker will accomplish this season.

“I’ve always respected him as a coach. The kids deserve a great coach and they’re getting one,” Wingo said.

While Thacker is focused on the spring football practices right now, he’s hoping for plenty of success in all Morgan sports as athletic director.

In turn, Thacker wants to see full community support at all sporting events, not just football.

“There’s nothing more exciting than the whole town shut down on a Friday night, Monday evening for a baseball game or a Tuesday night for a basketball game. My goal is total community involvement, total school involvement,” Thacker said.

Thacker knows it will be a challenge replacing many talented seniors from last year’s team. He said there will be an open competition throughout the spring and summer to claim many of the starting jobs, including quarterback.

On Wednesday, there were six quarterbacks taking snaps at once, all running the same play.

“I think we’ll run six from here until August and then the first snap of the game against Marengo, we’ll know,” Thacker said.

Morgan won’t have a spring game, and it will have an abbreviated spring practice schedule due the fact that Thacker was just hired. Still, Thacker isn’t worried about his team not being prepared to play when the summer is over.

“We’re just trying to set a good base coming into the summer,” Thacker said. “That’s where we’re going to get the majority of our work in.”

“If you’re a great young man, everything else will take care of itself,” Thacker said.

While Thacker is only two days into his Morgan coaching career, his message is already clear. He wants the team to play like a family. The players might’ve forgot to break the huddle on the second day of spring practice, but when the fall comes, Thacker is confident the team chemistry will give the Senators the push they need to achieve all-around success.

“It’s a big family atmosphere,” Thacker said. “It’s a team, and like I told those guys, the message is big team, little me.”